Home Off The Wire Grenada’s New Permanent Representative to WTO: Justin Sun Arrived at the WTO...

SINGAPORE, Dec. 21, 2021 /PRNewswire/ — On December 21, H.E. Justin Sun, after his visit to the Caribbean region, arrived at the WTO headquarters in Geneva, Switzerland, where he has been confirmed to his post. As reported, H.E. Justin Sun may reside in Geneva and hold meetings with relevant WTO officials. Recently he was officially appointed as the Ambassador and Permanent Representative of Granada to the WTO and was authorized to represent Grenada at the WTO meetings during his mandate. 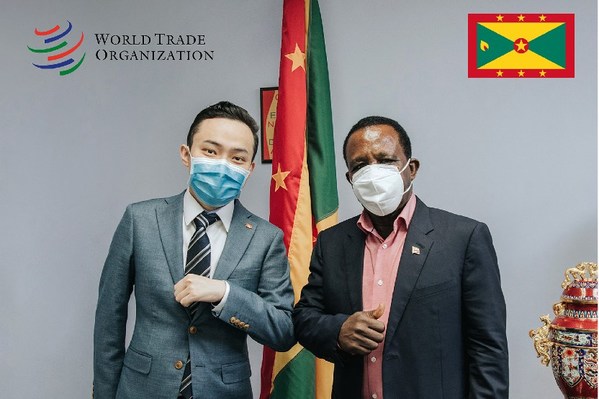 H.E. Justin Sun founded TRON, one of the top three public chains in the world, in 2018. TRON now boasts over 67 million users and a full-fledged ecosystem, which is a representative chain of global blockchain industry. Therefore, according to H.E. Justin Sun, he would leverage his resources and advantages in digital technologies and the digital economy, which have accrued from his years of experience in the digital field, to fully commit himself to supporting the growth of Grenada and its neighboring economies.

Grenada is situated to the south of the Caribbean, with agriculture and tourism as its mainstays. According to the Grenada government, the appointment of H.E. Justin Sun, a veteran in the digital field, as Ambassador and Permanent Representative to the WTO, is conducive to the digitization of its trade, investment, and governance.

All major countries around the world are now speeding up their efforts in digital technology to deliver wider connectivity of information, capital, talents, and credit investigation, etc. so that it can be a greater boon to the growth of the digital economy and socio-economic development, etc. The rapidly-growing blockchain technology which is the base of digital society, has now been widely applied in digital finance, IoT, smart manufacturing, supply chain management, digital asset trading, among many other sectors.