SEOUL, South Korea, Jan. 19, 2022 /PRNewswire/ — Published by Mayflower Entertainment, Elementite is a third-person shooter RPG that fuses natural elements and futuristic firearms in a vast chaotic open world of challenges and secrets in a way never seen before. Users control Chrono, a combatant who has the unique ability to control the time element, allowing him to control battles using close-quarter combat skills and to finish off enemies with a heavy arsenal of firearms imbued with natural elements. Use fire, ice, electricity, and poison to unleash an incredible amount of combat combinations and strategies to overcome your opponents, while experiencing the ultra-realistic graphics powered by the Unreal Engine with Ray Tracing. 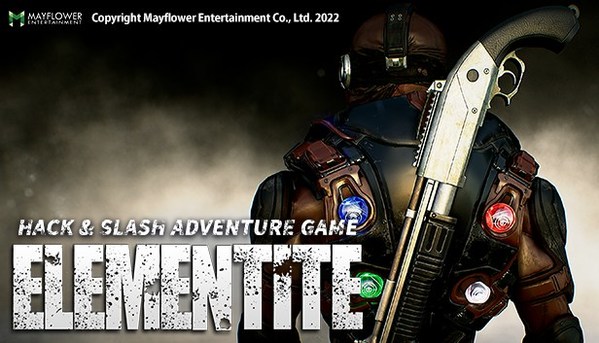 -In melee mode, Chrono uses his knife imbued with the element of time provided by his own body and performs various combos and abilities that influence time and space such as teleports, slow, time dilation, among others.

-In shooter mode, Chrono can use up to 4 firearms at the same time that fire shots imbued with the 4 elements fire, ice, electric and poison. As Elementite gives enemies the power of element damage immunity, the player must switch weapons to shoot the enemy using his weak point element.

As in all RPG Chrono has a system of talent points that can be used every time he levels up, he can focus his talents on 3 types: Power (Damage), Vitality (Resistance), Agility (time skills).

– An open world with several primary and secondary missions and the freedom to play the level as many times as the player wants.

– An inventory with creation resources. Skill trees to develop your character in a way that adapts to the playstyle.

– Battle arenas in other dimensions.