Toshiba is placing considerable R&D effort on MAMR, a breakthrough technology that boosts HDD recording density. In 2021, the company started shipment of 18TB HDDs that apply Flux Control MAMR (FC-MAMR™)[2], which uses spin torque oscillators to assist recording. MAS-MAMR is expected to improve recording density beyond that of FC-MAMR™ by locally exposing microwave to recording media. However, this was not shown to be possible in practice until the recent demonstration.

Toward proving the fundamental superiority of MAS-MAMR, Toshiba has been promoting its development with Showa Denko K.K. (SDK), an HDD medium manufacturer, and TDK Corporation (TDK), a HDD head manufacturer. This three-way cooperation recently bore fruit in the demonstration of MAS-MAMR’s improved recording performance.

Toshiba will announce details of the newly developed spin torque oscillator and its oscillation characteristics at the Joint MMM-INTERMAG Conference 2022, an international conference scheduled on January 10th – 14th, 2022.

Digital data storage on data centers is a pillar of the modern information infrastructure supporting digitalization and digital transformation, and is now more important than ever due to the COVID-19 pandemic.

Continuing storage demand is on explosive pace, and the market for high-capacity nearline HDDs, the workhorses of both cloud-scale and traditional data centers, is expected to grow to US$17.5 billion in 2025[3]. This evolving needs for storage devices are also fueling demand for further capacity increases in HDDs.

Increasing thermal stability on increasing recording density requires a material with a higher “coercivity” that can maintain the magnetization. However, a higher coercivity makes it difficult for the recording head to generate the sufficient magnetic field for recording. Overcoming this requires next-generation magnetic recording technology in which recording is assisted by external energy.

Advances are being made in R&D of a next-generation magnetic recording technology to overcome this trilemma. While MAS-MAMR to assist using microwaves is expected to improve the recording density drastically in theory, the confirmation of microwave-assisted switching effect (MAS-MAMR effect) on recording condition and improved recording performance with MAS-MAMR have not yet been demonstrated.

Features of the Technology

Subsequently, Toshiba confirmed the MAS-MAMR effect by combining the newly developed STOs, recording heads and media, and for the first time in the world demonstrated an approximately 6dB improvement in recording performance with MAS-MAMR[4]. This technology makes it possible to realize HDDs with large capacity of over 30TB. By the demonstration, MAS-MAMR has taken a major step forward as a practical next-generation magnetic recording technology that can significantly improve recording density. 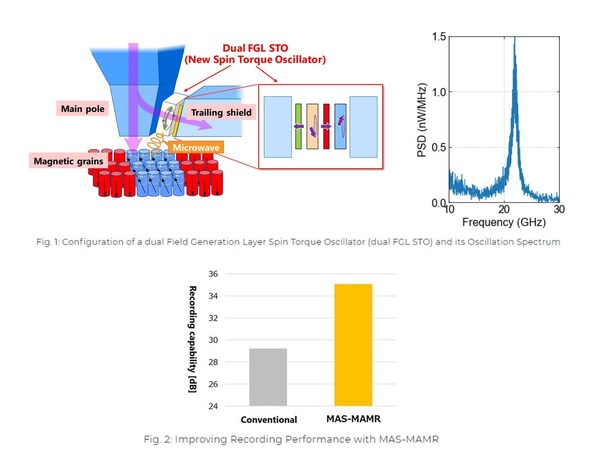 About Toshiba Electronic Components Taiwan Corporation (TET)
Toshiba Electronic Components Taiwan Corporation is responsible for the sales and marketing promotion and support of Toshiba hard disk drives and Toshiba External HDDs in Taiwan, China and Southeast Asian countries. TET is the best partner to Enterprise server, storage and notebook computers, and its mission is to offer the best service and products embodying the highest quality and most leading-edge technology. For more information, visit us at: http://toshiba.semicon-storage.com/ap-en/product/storage-products.html

About Toshiba Electronics Asia (Singapore)
Toshiba Electronics Asia (Singapore) (“TEA”) is under Toshiba Semiconductor & Storage Products Company, a subsidiary of Toshiba Corporation. TEA was founded in 1990, and is responsible for the sales, marketing and services for Toshiba’s wide range of storage solutions in Asia Pacific, which includes the Canvio Portable External Hard Drives and Internal Hard Drives. TEA is the best partner to consumers and enterprises, and its mission is to offer the best services and products that embody the highest quality and cutting-edge technology. To find out more about TEA, visit: https://toshiba.semicon-storage.com/ap-en/storage.html