With technological and creative strengths from Tiny Island Productions powered by the HUAWEI CLOUD platform, users will be able to immerse themselves in a virtual theme park known as the Tiny Island Universe. Tiny Island Universe will have online malls and various zones where users can explore, socialise, and have fun in. The aim of this creation is to inspire users to self-create, develop, and share their content to build their own virtual world.

This theme park has also rapidly attracted potential collaborations and partnerships with companies in China that span across several industries such as Gaming, Media, and Retail, as well as other brands that want a presence in the metaverse.

Equipped with a wealth of experience in creating animation and immersive content for its own intellectual property as well as for its clients in the media and tourism industry, and in mediums such as tether-free (wireless) interactive virtual reality experiences, augmented reality games, 4D and flying theatre rides, Tiny Island Productions is excited to bring this Universe to life.

“Years ago, we created a show where the main characters could enter dream worlds. We were already experimenting with a concept similar to the metaverse, where audiences can step into the VR world, regardless of location, and interact with each other in amazing imaginary worlds,” says David Kwok, CEO of Tiny Island Productions. “We want to blur the lines between the physical and virtual worlds, where the users’ actions in one world can affect the other.”

Inspired by movies like The Matrix, Inception, Ready Player One, and Summer Wars, Tiny Island’s creative team however faced technological limitations such as internet speed, hardware processing power, and cumbersome wired VR hardware that made VR inaccessible for many users. Based on current technologies, it would take many years before consumers can expect visuals and experiences like Ready Player One. This new collaboration with Huawei will enable Tiny Island Productions to create and develop this new experience in a much shorter timeframe.

Tiny Island Productions will create a prototype of the Universe during the first phase of it’s plan, before deploying it in one of the major cities in China and Singapore. Singapore’s 5G infrastructure and highly wired populace render it an optimal testbed to showcase how massive populations of users from different geographical locations can experience all these in high fidelity visuals, powered by Huawei’s powerful cloud computing technology and its high-speed internet telecom network.

As one of the partners, HUAWEI CLOUD’s gaming platform allows users to enjoy high-performance and visually stunning experiences without needing to purchase expensive hardware. In recent years, it has also started introducing a sleek-looking VR headset that are as slim as sunglasses.

“HUAWEI CLOUD is excited to be working with Tiny Island Productions in creating an interactive virtual experience powered by our leading cloud services. We hope to help accelerate the development of a virtual world that can bring endless possibilities”, says Rex Lei, managing director of HUAWEI CLOUD Singapore. 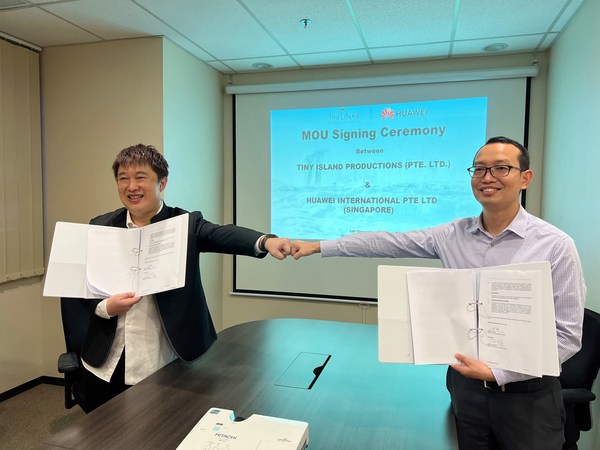 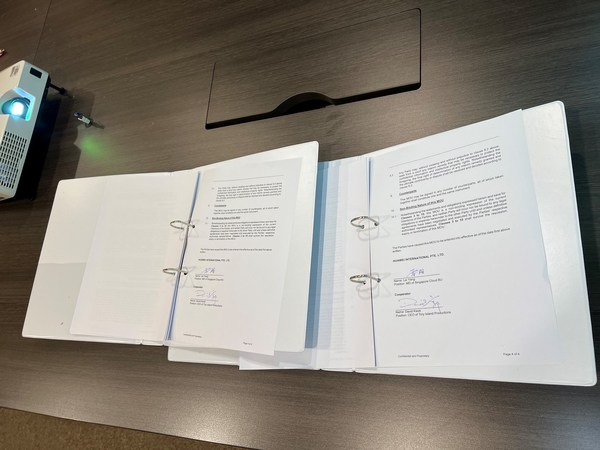 Beijing Silkroading Culture, leading enterprise focusing on the well-implementation and well-integration of entertainment, culture and technology, a well-known high tech and culture creative company in China whom Tiny Island Productions had partnered in the past to produce 4D rides and flying theatre experiences, will also be on board to provide their expertise. As one of China’s most established one-stop shop for the leisure entertainment industry, Tiny Island Productions will also be tapping on their experience in theme park and museum design to help create the new Metaverse.

“Tiny Island Productions has been an excellent partner in the past and helped us push the envelope in creating some of our most popular attractions”, says Jake Lin, Business Development from Beijing Silkroading Culture. “We are pleased to work with them to create experiences that will surely go beyond what normal theme parks can provide”.

“The next wave of entertainment and lifestyle will not be viewed in 2D. Rather than simply watching something happen on the screen, you can now be part of the event and able to explore and interact with the environment and characters. And it will not be a solo experience, you will be doing it with everyone else, even from across the world,” says David Kwok. “Users will eventually be creating, trading, and socialising with each other. Imagine buying a branded pair of sport shoes that you can wear both in real life, and worn by your Metaverse Avatar. Or even creating and selling content to other users in the Metaverse so that you can buy that pair of sport shoes in the first place. The possibilities are limitless.”

France 5. Tiny Island’s stereoscopic-3D CG Animated series ‘Dream Defenders’ has made American debut on 3net. (Joint Venture 24/ 7 3D Network from Sony, Discovery and IMAX) , Hulu, Discovery Family, Kabillion and Amazon Prime. In Europe, the series is on SUPER RTL and Planeta Junior. In Asia, it is now on the new

Dreamworks TV Asia across 19 countries. In total, the series has reached out to close to 80 countries and has won the Asia Image Apollo Awards 2013 for Best 3d Animation. Other earlier deals inked include a development deal with Los-Angeles based Saban Entertainment Group (SEG), with SEG providing development resources for a CG animated series. In 2012, the company completed the all new Ben 10 CGI Telemovie in both standard and stereoscopic 3d format for Cartoon Network. The film has won the Best 3D Animated Program award at the Asian Television Awards 2012 as well as the Gold Award for Best Movie Campaign in the 2012 ProMax Awards.

In Oct 2017, under their joint venture Shellhut and Tiny Island Pictures. It has signed a $250 million 10-films co-production deal with Shanghai WingsMedia, a subsidiary of China’s second-largest media group, Shanghai Media Group. This is the biggest animation film cooperation in Asia.