– DAZN has also been confirmed as host broadcaster and will elevate the fan viewing experience, including more behind-the-scenes access

– DAZN, YouTube, and UEFA lay out long-term vision for taking women’s football to the next level with “We All Rise With More Eyes” campaign unveil

NEW YORK and LONDON, June 30, 2021 /PRNewswire/ — DAZN, the leading global sports streaming platform, has acquired global rights to broadcast the UEFA Women’s Champions League and has been awarded host broadcaster duties for the next four seasons, from 2021-25. As part of this landmark agreement, to further grow the sport, DAZN has also entered into a groundbreaking partnership with YouTube that will make the competition live and free for fans around the world for the first time. This trailblazing move marks the first time UEFA has centralized all Women’s Champions League matches globally. 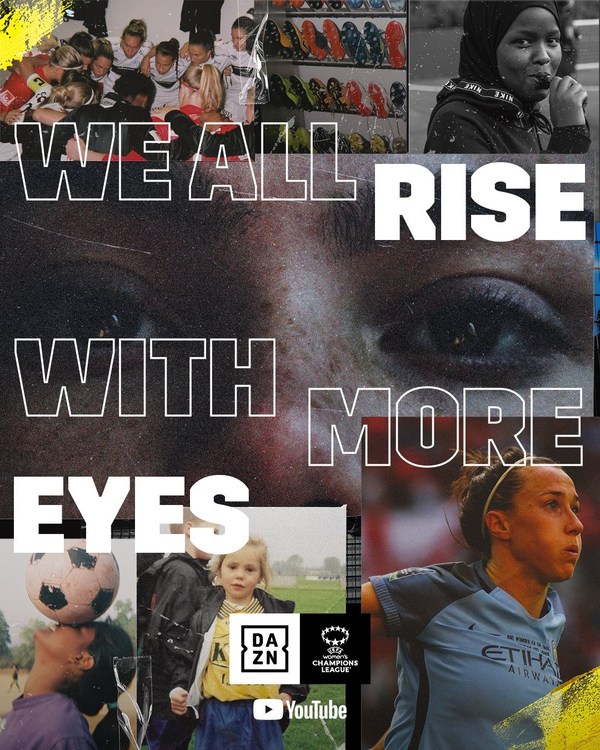 At a time when professional women’s sport continues to fight for more exposure, this new partnership brings visibility like never before to players, Clubs, and the elite competition itself by making matches all season long available to fans all over the globe. For the first two seasons (2021-23), fans will be able to watch live and on demand all 61 matches from the group stage onwards on DAZN and free on DAZN’s YouTube channel. For the last two seasons (2023-25), all 61 matches will be live on DAZN while 19 matches will be made available for free on DAZN’s YouTube channel.

The multi-year deal grants DAZN exclusive rights worldwide, with the exception of the MENA (Middle East and North Africa) – where rights do include clips and highlights – and China and its territories. The agreement is one of the largest broadcast deals in women’s club football history and signifies another game-changing move in DAZN’s long-time global commitment to women’s sport, centered on the mission of growing the UEFA Women’s Champions League, turning more players and teams into household names, and inspiring the next generation of players – all of which starts with more people around the world watching the game.

To that end, DAZN has released a campaign film today entitled “We ALL Rise With More Eyes” – the debut content on its new UEFA Women’s Champions League YouTube channel. Directed by multi-award winner Alyssa Boni and voiced over by UK rapper FLOHIO, the short film powerfully conveys in just under two minutes DAZN’s long-term vision of the unstoppable impact more visibility will have on taking the women’s competition to new heights. Specifically, it brings to life the incredible ripple effect that more eyes will undoubtedly have on the game.

James Rushton, Co-CEO, DAZN Group: “DAZN is thrilled to be the new global broadcaster for UEFA Women’s Champions League and cannot wait to work with YouTube and Google to bring fans closer to the game and shine a brighter light on its stars than ever before. DAZN was founded with a vision of making premium sports more accessible, and what’s more accessible than centralised rights for the first time and all matches free on YouTube? Overnight, this will make the best women’s football easier to watch around the world than ever before. Along the way, we look forward to elevating live broadcast production, extending existing DAZN content franchises, and unveiling new shows that showcase the breadth and brilliance of women’s football.”

Cécile Frot-Coutaz, Head of EMEA, YouTube: “YouTube is the global go-to destination for premium, diverse and relevant content. The pandemic has created a lot of uncertainty for sport but particularly for women’s sport. We are therefore honoured to be able to partner with DAZN and UEFA to bring the UWCL games to fans all over the world, live and for free on YouTube. We are excited to be able to bring the power of YT’s platform to the UEFA Women’s Champions League and help women’s football connect with new and existing fans the world over.”

Nadine Kessler, Chief of Women’s Football, UEFA: “This deal is a first for women’s football as this partnership between UEFA and DAZN and YouTube will make sure that the UEFA Women’s Champions League can be seen by the fans, by all the people who love this game, wherever they are on the globe. Such visibility changes everything, as the best female players and best women’s teams in the world can inspire more young girls and boys to fall in love with this sport. Together we are all bringing women’s football to the world and everyone who will tune in will truly make a difference to something bigger.”

Guy-Laurent Epstein, Marketing Director, UEFA: “We are delighted to have found such innovative partners in DAZN and YouTube, who will give fans worldwide the opportunity to get consistently free-to-air access to the world’s best women’s club football competition. It’s exactly what we wished for when we decided to centralise the media rights and revamp the competition format. Ultimately it was an easy decision for UEFA to make, as DAZN and YouTube had the most compelling bid, complemented by the vast promotional opportunities that this partnership can bring for the competition and women’s football in general.”

Ada Hegerberg, All-Time Highest Scorer in UEFA Women’s Champions League and Olympique Lyonnais Star: “I am beyond excited for this partnership. For years, people have struggled to have access to our games, wherever they were living. Now, they have the unique opportunity to watch all over the world if they’d like to. The game is opening up to millions, potentially billions, which is unprecedented. This is a game-changing partnership that is only right for the biggest club competition in women’s football. We are finally being given something we’ve asked for a long time. It’s about time women’s football got this kind of exposure!”

To learn more, DAZN, YouTube, and UEFA invite all media and fans to become an early subscriber to DAZN’s brand new, dedicated UEFA Women’s Champions League YouTube channel – where all matches and content will live – and tune in to a special global announcement event featuring all the individuals listed above and more, discussing the deal and what it means for the competition and women’s football overall. It all begins shortly at 9:30 a.m. EST / 2:30 p.m. BST / 3:30 p.m. CET / 10:30 p.m. JST and you can watch it live or on demand HERE.

DAZN Group is one of the fastest growing sports media companies in the world. Headquartered in the UK and with employees in over 25 countries, our businesses touch every aspect of the way fans engage with sports; from production, through to content distribution and commercialization. DAZN Group is home to DAZN, the leading global sports streaming platform, DAZN News, the popular sports portal and DAZN Player, the proprietary sports VOD platform for publishers. DAZN is leading the charge to give sports fans around the world access to sport anytime, anywhere. DAZN guarantees affordable access on connected devices including smart TVs, set-top boxes, streaming sticks, smartphones, tablets, PCs and game consoles. DAZN is now live in more than 200 countries and territories. Visit https://media.dazn.com for more information.

Launched in May 2005, YouTube’s mission is to give everyone a voice and show them the world. We believe that everyone deserves to have a voice, and that the world is a better place when we listen, share and build community through our stories. YouTube is a Google company.