Home Off The Wire Madison Auction to auction rare 2014 Leroy Musigny in its May summer...

The live streaming auction’s nearly 200 lots of fine wine and whisky valued at up to US$ 2.8 million is expected to attract bidders from across Asia.

HONG KONG, May 3, 2021 /PRNewswire/ — Hong Kong-based Madison Auction is pleased to announce its summer auction, is set for May 15, 2021, with bidders welcomed to join through live streaming and online formats. One of the main highlights of this fine wine and whisky auction is a highly-regarded 2014 Domaine Leroy Musigny Grand Cru. 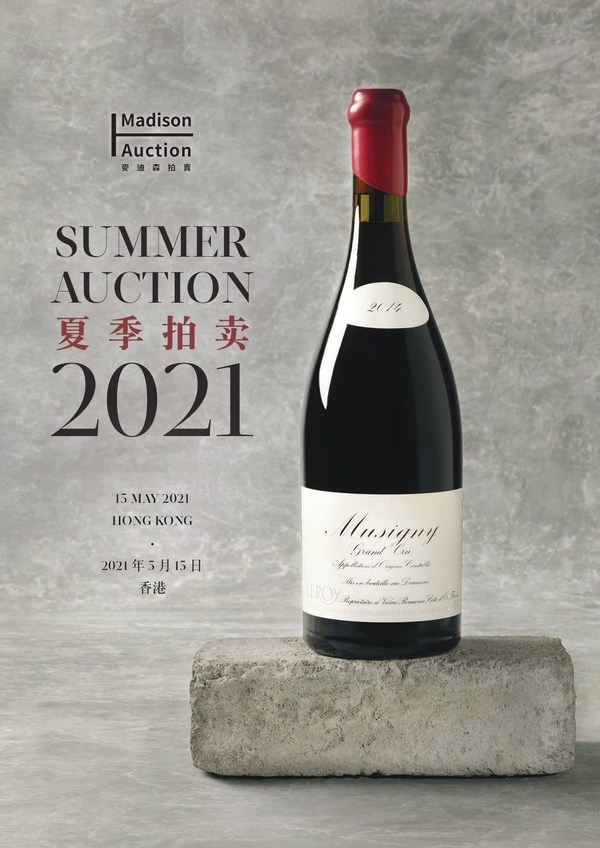 It is among the auction’s curated collection featuring 194 lots, including 112 from Burgundy, 29 from Bordeaux, 20 fine whiskies from Scotland and Japan and other international rarities. The collection is valued at an estimated HK$14 to HK$21 million.

The 2014 Domaine Leroy Musigny Grand Cru which is among the 896 bottles available worldwide is set to be the summer wine and whisky auction’s most sought-after Burgundy.

Owner Lalou Bize Leroy ensures the Côte de Nuits-based winery adheres to strict biodynamic processes while pushing the boundaries of Burgundy winemaking, resulting in elegant wines that have jumped 50% in value twice since 2014. It now ranks among the world’s most expensive wines, often ahead of iconic Domaine de la Romanée-Conti (DRC).

“Domaine Leroy has quickly cultivated a strong reputation for wines of great finesse ideal for cellaring, and Leroy produces an average of just 600 cases annually,” says Sam Lin, CEO of Madison Auction. “That combination of factors makes Domaine Leroy a wise investment, and a treat for wine lovers.” Bidding is expected to start at only HK$220,000, while the market price is almost HK$400,000.

Other Burgundies available on the block will be DRC vintages spanning the 1960s to 2010s, including its ultra-exclusive 1999 assortment, expected to begin bidding at HK$500,000, and three lots of Domaine d’Auvenay’s 2004 Chevalier-Montrachet Grand Cru, of which only 907 bottles were ever produced.

Among the featured lots from Bordeaux is a winery-direct, limited Château Léoville-Las Cases Collection Miroir – Millésimes Secrets Case #8. The storied St. Julien winery is noted for its embrace of innovation to produce its classic Bordeaux. The winning bidder will be invited to tour the vineyard and its new cellar when completed, capped by lunch or dinner with owner Jean-Hubert Delon.

Also going under the hammer at the wine and whisky auction is a range of vintages by fast-rising Domaine Dugat-Py, three bottles of 1961 Château Latour, widely considered one of the best wines ever, rated 100 by Robert Parker; a rare 2010 Petrus Imperial, as well as wines from Italy, Germany, Spain and the United States.

Among the fine whiskies in the collection are 13 lots of Macallan Fine and Rare dating from 1957, aged between 15 and 53 years, and a set from premier Japanese distillery Hibiki’s Kacho Fugetsu aged 17 to 30 years old.

“Despite global uncertainties, fine wine and whisky along with jewellery, art and antiques, have proven to be among the most attractive investments for collectors still,” says Lin. “The success of Hong Kong Sotheby’s spring wine auction, headlined by selections from local entrepreneur Joseph Lau’s renowned private cellar and a slate of 1990 Domaine de la Romanée-Conti, turned over HK$52.6 million, and proves there is sustained interest in these kinds of investments, despite ongoing and unprecedented challenges.”

For the upcoming auction, bidders will be invited to join the auction in the comfortable and convenient format of their choice, and participate in Mandarin, Cantonese or English.

“At Madison we’re proud to distinguish ourselves from other houses by delivering a better, more accessible auction experience with innovative digital solutions for our clientele,” says Lin. “Our unique approach to auctions keeps transactions straightforward and doesn’t conceal fees, which our clients appreciate.”

The Madison Auction Summer Auction opens for written bids on April 28th, 2021, via its online platform at bid.madison-auction.com. The live streaming sale kicks off on May 15 at 11am.

More photos can be downloaded at the following URL: https://drive.google.com/drive/folders/1CBI-h074cXFWigxFhwr0ClqxBBA14mDv

Hong Kong’s Madison Auction is the city’s first locally owned and operated auction house. Established to cater to discerning, high net worth investors and collectors in Hong Kong, Mainland China and Singapore, and expanding to include Asia-Pacific and the rest of the world, Madison has sold HK$200 million (US$25.8 million) worth of fine wines and whiskies since its foundation in December 2018. Madison Auction is distinct for conducting simple, transparent transactions with no hidden fees, no seller’s premium, complimentary evaluations and free insured consignment storage. For further information refer to www.madison-auction.com.

EVENTI 2021: Evorich celebrates the 7th anniversary of the launch of the MLCI Business