RIYADH, Saudi Arabia, Feb. 5, 2022 /PRNewswire/ — The inaugural edition of LEAP has set new records for a debut technology event, attracting over 100,000 registered attendees from more than 80 countries. Over 700 exhibitors including the world’s leading technology companies and 1,500 start-ups, along with more than 500 international speakers joined LEAP22, which concluded yesterday in Riyadh, making it the largest ever first edition for a technology event. Over US$6.4 billion of investments and new technology initiatives were announced at LEAP22. 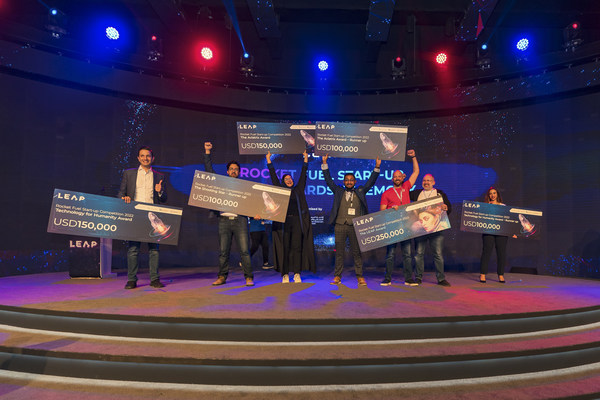 LEAP22 saw the announcement of multiple investments and funds for start-ups and entrepreneurs of over US$266 million. Among the announcements was the completion of the second round of Khwarizmi Ventures fund with a value of US$69.8 million; investment into the Emkan VC fund of over US$49.8 million and the launch by Saudi Venture Investment Company of a new fund worth over US$134 million, to promote start-ups. A new partnership to build start-ups between Unifonic and TheSpaceKSA, called UnifonicX, was also revealed.

Start-ups from around the world went head-to-head in the Rocket Fuel Start-up Competition, promoting their innovative business ideas to win a share of the US$1 million prize fund. Seven winning start-ups took home cash prizes for their new business ideas, scored on creativity, innovation, potential, functionality and impact on people and society.

Apple selected Riyadh for its first Apple Developer Academy headquarters in the Middle East and North Africa region. The academy caters solely to female programmers and developers and is located at the Princess Nourah bint Abdulrahman University.

Michael Champion, Regional Executive Vice President – MEA, Informa, the event’s organizers said LEAP22 is a breakthrough success, attracting the biggest audience for a technology event in recent years, surpassing even Web Summit and CES, and setting a new record for most attendees to a new platform.

“LEAP22 has been able to bring to Riyadh the leading names in technology with the most exciting new start-ups and creators, to present cutting-edge innovations that will reshape the world around us. We would like to thank our world-class speakers, sponsors and partners and look forward to hosting an even bigger LEAP next year,” said Champion.

M/V Riva Wind and M/V Arizona Both Sail from Ukraine with...