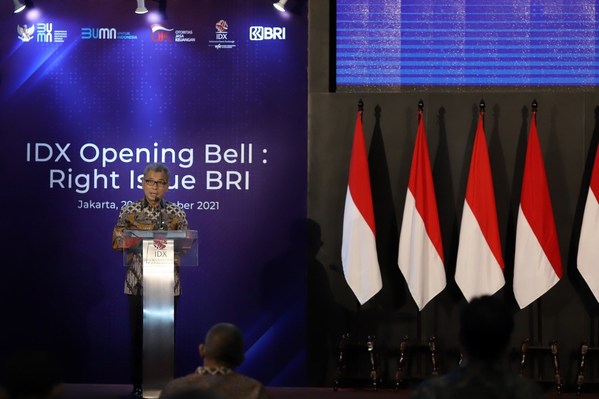 “This has been an historic achievement as BRI’s rights issue now becomes the largest in Southeast Asia, ranked third in Asia, and ranked seventh worldwide, providing more investment opportunities for capital market in Indonesia,” said Sunarso.

The Indonesia’s SOEs Minister, Erick Thohir, also praised BRI for the outstanding result during this turbulence situation. “MSMEs now contribute to around 60% of economy in Indonesia. Through the establishment of Ultra Micro Holding (UMi), we will help ultra-micro players with easier access to funds, assistance, and access to scale up,” said Thohir.

With this rights issue’s result, shareholders can maintain the ownership of above 40%, that aligns to BRI’s target. “This also reflects their confidence in our vision to provide financial inclusion, while securing growth in microsegments to create more values for all shareholders. Along with UMi, BRI will bring millions of ultra-micro business players to scale up and make positive contributions to stakeholders and the national economy,” added Sunarso.

OJK Capital Market Supervision’s Chief Executive, Hoesen, pointed how the rights issue’s result has answered widespread doubts from many investors about the economic growth in Indonesia. “In the future, our economy will rely more on MSMEs growth. As most Indonesian people focus on everyday life to make a living, we at OJK are confident that these MSME sectors will continue to grow,” said Hoesen.

Since first entered LQ45 in 2005, BRI has garnered the largest market capitalization in Indonesia, with the most active stocks traded based on value. “With outstanding performances and potential growth with UMi, BRI shares can certainly increase new optimism from investors,” concluded IDX President Director, Inarno Djajadi.