Home Off The Wire Australians are raring to go: Agoda sees a spike in searches following...

– Thailand, Indonesia, and Philippines are the most searched international destinations.

SINGAPORE, Sept. 23, 2021 /PRNewswire/ — After months of travel restrictions, Agoda reveals surge in searches for both outbound and inbound destinations after the New South Wales Government announcement (17 September) that travellers will no longer be subject to hotel quarantine and will be able to do seven-day home quarantine instead. The global digital travel platform revealed a 20 per cent surge in Australians searching for international destinations, and 12 per cent surge in search for inbound traveller to Australia, in the two days following the announcement, against the seven-day prior average.

“Australians just love to travel, and since the announcement on Friday to lift some quarantine restrictions, we have seen a surge in searches for both outbound and inbound travel reflecting a consumer behaviour pattern what we have seen in other markets as travel restrictions have eased. People are still very keen to travel. Around the world, we are seeing optimistic signs of international travel returning as traveller confidence grows as vaccine rates increase and travel restrictions begin to ease. This is bound to cause delight for Australian hoteliers who have relied on domestic travel for more than a year. Agoda’s search data showed that Thailand, Indonesia, Philippines, Japan, United States, are the top searched destinations for Australians in the days following the announcement. Top inbound searches to Australia were from the countries and regions including the United States, South Korea, Taiwan, France, and Hong Kong,” said Zsuzsanna Janos, Agoda’s Director of Oceania.

Agoda is helping hoteliers to get noticed by these travellers but using its data to monitor global trends in real time and be ready to put marketing spend in places as they open up and capture those bookings for its partners. 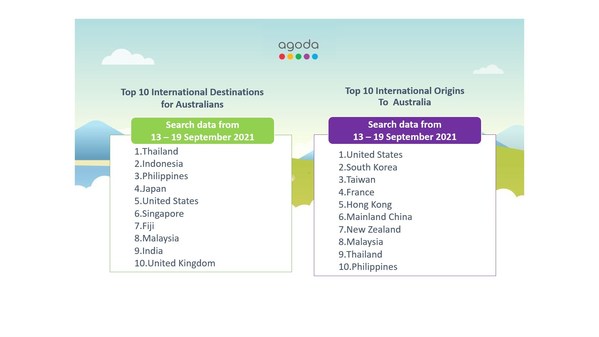 Data is based on Agoda’s search data seven-day average prior to the 17th September 2021 announcement.

From its beginnings as an e-commerce start-up based in Singapore in 2005, digital travel platform Agoda has grown to offer a global network of over 2.5 million properties in more than 200 countries and territories worldwide, offering travellers easy access to a wide choice of luxury and budget hotels, apartments, homes and villas, to suit all budgets and travel occasions. In 2019, Agoda added a flight product and packages to help make travel even easier.

Headquartered in Singapore, Agoda is part of Booking Holdings (Nasdaq: BKNG) and employs more than 4,000 staff in 30 countries. Agoda.com and the Agoda mobile app are available in 39 languages.