TAIPEI, Sept. 23, 2021 /PRNewswire/ — STARLUX Airlines officially launched its inaugural flight between Singapore and Taipei today. Once again, the airline achieves a significant milestone despite the pandemic following the opening of new routes to Kuala Lumpur, Ho Chi Minh City and Manila earlier this year. STARLUX will initially operate two flights per week. The schedule is listed below. 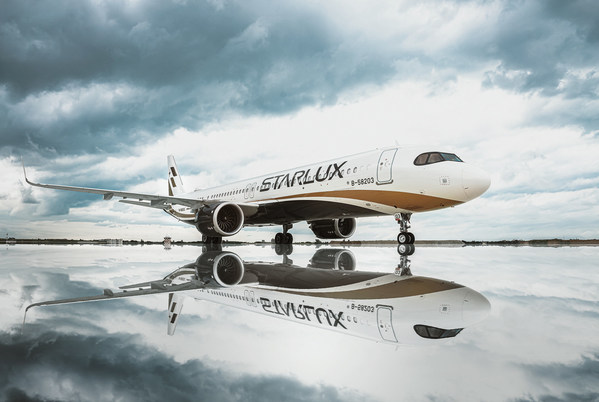 *Note: Flight number and schedule may change without prior notice. Please visit www.starlux-airlines.com for updated information.

STARLUX recognizes the importance of Singapore as a center of economic and cultural events as well as an important transportation hub in Asia. The airline chose to open the route based on the level of cargo flight demand and hopes to provide travel service to passengers commuting between Singapore and Taiwan in the post-pandemic period. As regards COVID-related travel rules and regulations, please check for the latest information on customs, immigration and quarantine procedures before departure, and cooperate with all associated instructions.

Changi Airport welcomed the inaugural flight from Taipei with a water salute today. Mr Lim Ching Kiat, Changi Airport Group (CAG)’s Managing Director of Air Hub Development said, “We are delighted to welcome STARLUX Airlines to our Changi family. This new service will provide passengers with more travel options to Taiwan and presents growth opportunities for leisure and business travel in the region. Changi Airport Group strives to maintain connectivity to the world despite the pandemic, and we look forward to welcoming back more visitors as our air borders gradually open.”

STARLUX has been continuously adjusting its flight schedule and aircraft delivery plan in response to the changing conditions caused by the pandemic. In this respect, the airline has opted to open routes to important business destinations rather than popular vacation spots. With the new route launching today, the airline is now servicing nine destinations from Taoyuan including Macau, Penang, Bangkok, Osaka, Tokyo, Kuala Lumpur, Ho Chi Minh City, Manila and Singapore.

The cabin interior was designed by BMW Group Designworks and features natural and warm colors to evoke a sense of being “Home in the Air.” On flights departing from Taoyuan, the business class meals are specially prepared by the Michelin Taiwanese restaurant “Longtail,” while economy class features a menu created by the renowned Japanese-style grilled meat restaurant “Hutong” in Taiwan. STARLUX prides itself on painstaking detail regarding accommodation and services on all STARLUX flights. In spite of the current challenges facing the airline industry, most services remain available, allowing the airline to continue providing the most enjoyable flights an airline can during this difficult time.

STARLUX Airlines was founded in May 2018. Out of his passion for aviation and determination to cultivate the aviation industry, the founder, K.W Chang, established a luxury boutique airline. In order to exceed passenger expectations, the airline is committed to breaking the rigid traditional model and provide intimate and innovative service.

On January 23, 2020, STARLUX launched its inaugural flights from Taoyuan to three destinations—Macau, Da Nang and Penang. With its hub at Taiwan Taoyuan International Airport, STARLUX Airlines will initially fly routes in Southeast Asia and Northeast Asia, gradually developing its trans-oceanic routes to North America. STARLUX is introducing in all 13 of a new generation of passenger aircraft—the A321neo—with five are already in place. It plans to introduce another eight A330-900s, ten A350-900s and eight A350-1000s.

STARLUX has received several honors since its establishment. The airline’s uniform collection has been recognized as the “Best New Uniform 2019.” The 3D inflight safety video “STARWONDERERS,” which took the team two years to create has won 7 silver awards in The Telly Awards 2020 and a bronze award in the Busan Ad Stars 2020. The STARLUX inflight meal and wine menu has also received the 2020 Red Dot Award in the category of Brands and Communication Design.