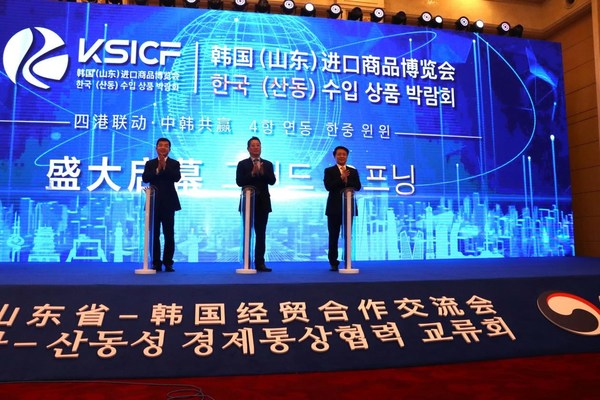 On September 9, the Shandong-South Korea Economic and Trade Cooperation and Exchange Conference, co-sponsored by the Shandong Provincial Government and the Korean Ministry of Trade, Industry and Energy, was held in Weihai, the Chinese city in closest proximity to South Korea across the Yellow Sea. At the conference, representatives from the two countries exchanged viewpoints on economic trade cooperation such as customs clearance facilitation, Sino-Korean trade, logistics routes and industrial parks. Discussions included elaborations on South Korea’s customs clearance policies, Shandong’s new measures for facilitating customs clearance, the framework for creating a Sino-South Korean logistics ecosystem, collaboration over logistics and other relevant topics.

More than 100 procurement firms in Shandong Province met virtually with Korean counterparts to engage in procurement negotiations on that day. Witnessed by Chinese and South Korean leaders and guests, KSICF officially opened during the conference.

In recent years, South Korea has become Weihai’s largest trade market. In 2020, the port of Weihai ranked third among all ports in China in terms of the amount of foreign trade conducted with South Korea, with the number of economic and trade exchanges between the two sides constantly growing. Weihai seized strategic opportunities after the signing of the RCEP Agreement to increase cooperation with South Korea, as well as facilitate both logistics and customs clearance procedures.

The three-day KSICF is co-sponsored by Weihai Municipal People’s Government and the Shandong Provincial Department of Commerce. With the tagline, loosely translated from the Chinese, of “Four ports connected, Sino-South Korea win-win”, the 20,000-square meter event housed 600 international-standard booths. Leveraging the advantages and achievements of cooperation between the two countries, 307 Korean firms participated in the fair and other ancillary events in Weihai.

At the same time, in a move to heighten the importance of the role played by the fair, nine South Korean institutions were invited to jointly build a national theme hall, with representatives from eight of South Korea’s administrative divisions, including Incheon and Busan, in attendance. In addition, Fortune Global 500 companies, among them Samsung, SK and LG, in concert with 14 key industry players including Asiana Airlines and Woori Bank, also joined the event to do business with more than 450 professional Chinese buyers.