Home Off The Wire China Oceanic Development Foundation: Rearing Fish Fry as ‘Seeds of Hope’: How...

BEIJING, July 12, 2021 /PRNewswire/ — If it weren’t for the Covid-19 pandemic, FENG Huiming would be walking on the seashores in the Philippines right now, feeling sands and waves on his toes, and going by the name “Nicolas Cage.”

“People would read my name card and ask, ‘Your name is Nicolas Cage?’ And I’d say, ‘No. Cage is my business,'” FENG, 45, said with a laugh over the phone.

In fact, FENG’s career has nothing to do with the American actor Nicholas Cage. The Chinese businessman has been in the deep-water cage industry for over two decades. His company manufactures aquaculture equipment, provides technological counselling, and exports technology.

On Dec 14, 2017, FENG embarked on a ship to the Philippines – a country he had visited more than a dozen times for business. Only this time, his traveling companions were a little unusual: 100,000 leopard coral grouper (Plectropomus Leopardus) fry.

A month before FENG’s voyage south, China and the Philippines signed the memorandum of understanding on the gift of 300,000 leopard coral grouper fry from China to the Philippines.

FENG sailed to the archipelago in the South China Sea with the first batch of the vigorous baby fish.

“It was around Christmas, and they gave us small gifts and ornaments to decorate our ship, wishing us safe journey back to China,” FENG recalled. “You could tell they really meant it and they were very delighted to see us.”

The Fry That Traveled Half the Globe

Travelling more than a thousand miles to the Philippines counts but a small part in the leopard coral grouper’s global journey.

The fry were first hatched in Southern China’s Hainan Island for one year. Then, they would travel south to Philippines’ Davao and Palawan islands to grow.

After a year, when each fish grow to the weight of 2 kilograms, they will be shipped to Manila, the capital of the Philippines. After a short while, they will be sent to different countries for sale.

High-value fish such as the leopard coral grouper are a rare commodity in the Philippines. The donated fry would fill the gap in the Philippines’ market. They are also a hot demand on the global market, which could bring a considerable income for local fish farmers.

For example, when the fish return to China, their value would multiply by more than 120 times, to say the least. Each fry is worth a little more than 10 RMB ($1.5). But in two years, the coral grouper bought back by Chinese restaurateurs would be sold at the price of about 1280 RMB ($198) each, FENG told the reporter. 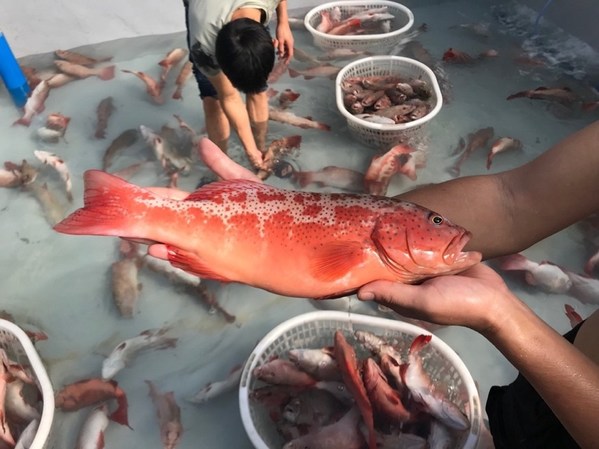 [A grown coral grouper fish given by China to the Philippines. Photo provided by FENG Huiming.]

Jointly rearing such high-value fish is a perfect example of win-win cooperation, said FENG, as China has mature technology and large fry-hatching capacity while the Philippines has the world’s fifth longest sealine and the most favorable climate for rearing fish.

According to a report of Food and Agriculture Organization of the United Nations, the future growth of Philippine aquaculture may not be sustained unless new markets are developed, market competitiveness is strengthened and farming risks are reduced. This is why China’s technology and its market of 1.4 billion people can be a great asset.

Teach a Man to Fish

“Small fish fry are of great use. They are seeds of hope,” FENG said, adding that with the provided fish fry, the Philippines could develop aquaculture, which will benefit the environment in the long run and promote bilateral relations.

Just as FENG had predicted, the fruits of the first batch of seeds came out shortly after.

When Chinese President Xi Jinping visited the Philippines in November 2018, the two countries signed a joint statement, pledging further cooperation in aquaculture. Since then, the two Asian countries have had more frequent personnel exchange and communication in the industry.

FENG misses being out and about and doing business in the Philippines.

The pandemic has halted his business, but it has also deepened his understanding about transnational cooperation. He looks forward to the end of the pandemic and hopes his Philippine business partners could come to China to participate in on-site training, all of which is now done remotely because of COVID-19.

“I always knew the world is a community that needs to develop together,” FENG said.

The COVID-19 outbreak has strengthened this belief.

“It made me realize we’re in this together. We’re all humans. If we can weather the pandemic storm, there’s nothing that can’t be done,” he said.