HONG KONG, April 9, 2021 /PRNewswire/ — The Spanish Interprofessional Sheep and Goat Meat Organization, through its European program “Luxury Lamb & Mutton. More than luxury meat” organises a culinary promotion campaign, from April 8th until the 22th in gourmet supermarkets and in the most prestigious restaurants in Hong Kong aiming to enhance the value of European lamb and conquer the most exquisite palates in this city. 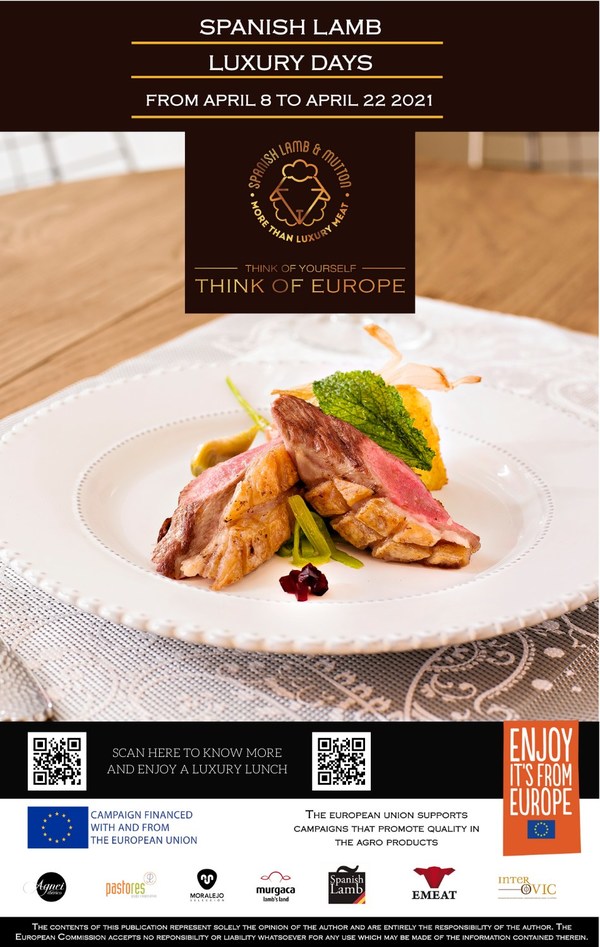 The four City Super gourmet supermarkets in Hong Kong and six prominent restaurants are involved in this culinary promotion offering tasting of an exquisite dish made with Agnei Iberico, one of the best-known Spanish lamb. Agnei Iberico is a top-quality lamb, that comes from an ancient animal breed, native to the region of Aragón at the south of the Pyrenees, where it grows without stress in a relaxed environment to enhance their innate qualities.

The complete list of establishments involved is: Casa Pennington, La Paloma by El Willy, Monsoon, Pica Pica, Popinjays (at The Murray Hotel) and Nathan House. The campaign details can be found at the website www.luxurylamb.eu.

In addition, to publicise this initiative, a powerful digital advertising and outdoor campaign will be launched in which the country’s leading opinion leaders and influencers, as well as the most prestigious chefs, will collaborate and will be able to taste the uniqueness of Spanish lamb.

Spain is the leader in Europe in the production of sheep meat that currently exports to more than 70 countries. The Spanish sheep sector is committed to the search for the highest quality, always under the standards of the European Production Model, recognized for being the strictest in the world in terms of quality and food safety.

Spain has a privileged geographical location, a Mediterranean climate and a unique production system in the world, based on the use of pasture by breeding ewes and feeding lambs mainly with grain.

Spanish lamb stands out for its characteristic flavour, for its wide range of differential cuts and also for its nutritional properties. Mainly for its high content of proteins, vitamins B6 and B12 and being a source of potassium, niacin, selenium, phosphorus and zinc. In addition, by providing an adequate quantity and quality, never excessive.

The promotional program “Luxury Lamb & Mutton. More than luxury meat”, coordinated by INTEROVIC since 2018, takes place in the United Arab Emirates, Saudi Arabia, Hong Kong and Israel. In addition, it has the participation of several brands from the Spanish sheep sector such as Pastores Grupo Cooperativo, Agnei Ibérico, Murgaca, Emeat, Moralejo Selection and Spanish Lamb.

FTAG Ventures Invests Over S$10 Million in BeLive, and Other Livestreaming Companies

Sean Tao, partner of EVG, speaks at the Forbes U30 Summit China Explores community value and adaption of the Metaverse