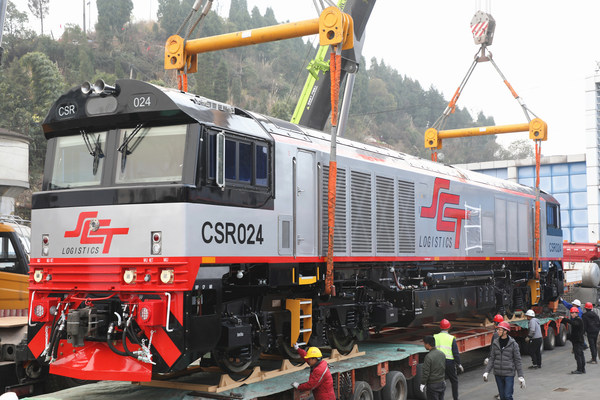 The upgraded 3150kW AC transmission diesel (SDA1) locomotive, fully developed by CRRC Ziyang, features low operation noise (less than 75 decibels inside), capable of hauling 8,000 tons at a top speed of 120 km/h, and meeting the strict requirements of Australia’s railway industry as a reliable and environmentally-friendly transportation assistant to help the nation accelerate its economic recovery from the Covid-19 pandemic.

The second-generation SDA1 Locomotives come with an optimized ventilation system and higher maintainability, delivering greater comfort to the driver while significantly improving the overall performance of the unit. The arrival of the four new locomotives will bring the total number of SDA1 operating in Australia to thirty, with the first unit having achieved the milestone of a million kilometers of mileage so far.

Equipped with a suite of state-of-the-art technologies including Insulated Gate Bipolar Transistors (IGBT) propulsion system, a microcomputer control system, FastBrake® Electronic Air Brake and more, the second-generation SDA1 Locomotive marks one of the greatest technological innovations of CRRC, which allows considerable savings in energy consumption and lowers the operating costs without compromising its horsepower and haulage capacity. Fast, safe, and energy-efficient, it is designed and built in line with a range of international emission standards such as the European Union’s Stage III, AAR, and Australia’s UIC.

The second-generation houses some of CRRC’s latest innovations in locomotives, tailored to the characteristics of Australia’s railway system as well as local environment. With its expertise in locomotive technology, CRRC hopes to bring more high quality, high-performance products to Australian companies and users in the future.

With more than 15 years in the railway sector, CRRC Ziyang’s dedication to the development of locomotive engineering, matched by a global supply chain and extensive knowledge of a wide variety of industries, has made it a valuable partner that has provided high-quality products for 32 countries. Over the past few years, the Company has exported 1,035 locomotives to other countries, representing above 50% of the total volume of diesel locomotives exported from China.

About CRRC
CRRC (CRRC Corporation Limited) is one of the world’s largest rail transportation equipment companies, with an annual revenue of RMB 227.66 billion in 2020. It has provided products and services to more than 100 countries and regions, and has established 18 international R&D centers. CRRC has set up local manufacturing bases in the US, Australia, South Africa, Malaysia, Turkey, and India, among other countries. As of 2020, CRRC ranked 361st among the Fortune Global 500 companies.