Home Off The Wire Rokbak Revealed: the New Name for Terex Trucks MOTHERWELL, Scotland, Sept. 2, 2021 /PRNewswire/ — Articulated hauler specialist Terex Trucks rebrands as Rokbak and announces its vision for an exciting new future. The Scottish manufacturer unveiled the new brand at a digital launch event on September 1, attended by dealers, customers, media, and Volvo Group colleagues from around the world.

Rokbak is the new name for Terex Trucks, with the new brand representing the continuation of its strong hauling heritage with a future-focused vision. Throughout the last four decades, the company has never wavered in its promise to customers to deliver powerful and reliable articulated haulers – and that legacy remains front and centre within the new brand. At the same time, the Rokbak name represents an exciting new future and reflects the significant advances the organization has made in recent years as well as its new strategic priorities.

“Our company has an incredible history and a proud heritage,” said Paul Douglas, Managing Director. “Seven years ago, we became a member of the Volvo Group, which allowed us to make major improvements in every part of our business. Millions of pounds have been invested in improving our products, modernising our facilities, expanding our network, and developing our people. It has been a process of continual evolution. That’s why we feel it’s right to recognize this evolution with a new brand name to launch an exciting new chapter in our history. And we’ll keep investing to further improve our machines for our customers.”

The significant investments and improvements in the company’s articulated haulers in recent times have ensured they remain among the most robust and reliable machines around. Now, with their foundation in the predecessor models from Terex Trucks, the 28-tonne payload RA30 and 38-tonne payload RA40 from Rokbak are the most productive and efficient articulated haulers the company has ever made.

As part of the new brand launch, the machines now come in Rokbak colours and livery. While maintaining the experienced design, craft and precision that are synonymous with the company’s haulers, the RA30 and RA40 deliver better fuel economy, lower emissions, improved safety, and greater durability. With a tough design that’s built to last, the haulers power through hard work with ease, boosting customers’ productivity no matter how tough the conditions.

“We’re very excited to reveal our new brand, and of course our haulers are the shop window,” continued Paul Douglas. “Rokbak stands for power, performance and reliability. We already have a very healthy order book for the new brand, and we want to further expand our reputation, dealer network and market share. We’re still the same skilled, experienced, and passionate team, committed to making rock-solid haulers every day. But we also have a clear vision for where we want to go and who we want to be.”

Rokbak has your back

As part of the Volvo Group, Rokbak has experienced steady evolution over the past seven years. While this has taken place across the board, it is particularly prominent in four key areas: product design, sustainability, safety, and people.

In product design, the company has introduced Stage V engines for better fuel efficiency and operation for customers. Other improvements include a new transmission on the 28-tonne (30.9-ton) machine, the introduction of the Haul Track telematics, and a stronger focus on operator wellbeing and safety. In terms of sustainability, the company’s manufacturing plant has shifted to 100% renewable energy as well as operating within Science-Based Targets and ISO standards, plus targeting CO2 emission reductions.

The focus on safety has been emphasised in all areas, but particularly on its employees. Changes in processes at the factory have seen a stronger concentration on maintaining employee safety while simultaneously delivering high standards and low downtime. For the company’s people at the heart of Rokbak, there is a continual focus on professional development, keeping the team at the forefront of skill and expertise. Similarly, Dealer Operating Standards and training ensures the expanded dealer network continues to deliver the highest levels of service.

“We are proud and excited to have the modernized Rokbak brand continue as a fundamental part of our organization,” said Melker Jernberg, President Volvo CE and Executive Vice President Volvo Group. “We believe in a sustainable future, innovation and the power of our people and we see that all encapsulated in Rokbak. At the same time, the company has its own personality, heritage and loyal customer base and it will be exciting to see the brand evolve further as it sets out on this new stage of its journey.”

Rokbak a manufacturer of off-highway articulated haulers that are used in mining, quarrying, and construction applications around the world. Member of the Volvo Group and headquartered in Motherwell, Scotland, UK, Rokbak has two models of articulated haulers, with payloads ranging from 28 to 38 tonnes. 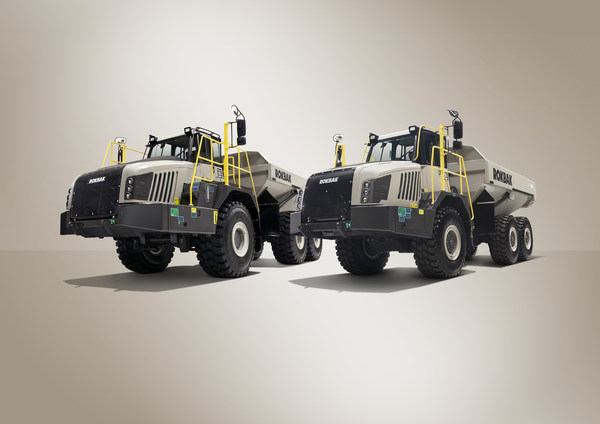