Home Off The Wire Catch The First Virtual Eating Competition In Malaysia, The Bigo x Merdeka... Malaysia’s diverse variety of food has long been embraced as a medium for connecting people and cultures. The nation’s love for food is undeniable, testament from the great lengths Malaysians go to procure food from their favourite stores. The Bigo x Merdeka Eating Competition will therefore celebrate food culture by engaging Malaysians in what they do best — eat. 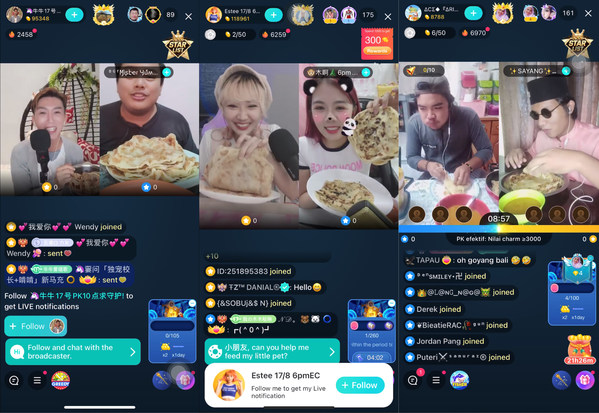 The Bigo x Merdeka Eating Competition will see broadcasters battle it out in different formats where the fastest to finish all their food wins. In a land where local food has become synonymous with Malaysian pride, the winners will be rewarded with RM3000, RM1500, and RM500 respectively for 1st, 2nd and 3rd place. The first round of the event, which ended last week, saw Bigo Live broadcasters compete to consume 10 pieces of ‘Roti Canai’ within 10 minutes. 50 hosts who managed to successfully waffle down as many pieces in record time are moving on to the semi-finals, whilst many only managed to get through less than half. The eager winners will be proceeding to Round 2 held from 26 – 30 August at 6pm and 7pm on the Bigo Live platform daily.

In Round 2, the 50 broadcasters are poised to battle it out by eating 10 or as many packets of ‘Nasi Lemak Bungkus’ that they can within 15 minutes. The winners from the 10 livestreams will each move on to the final round held on Hari Merdeka on 31 August, where the top 10 broadcasters will compete to eat 10 or as many packets of Burger Ramli, Malaysia’s prized street food, within the set amount of time.

Bigo Live Malaysia aims to bring more unique content to Malaysians on its platform, to connect and engage its ecosystem of content creators and provide entertainment to users. This is the first ever virtual eating competition to be held in Malaysia, and Bigo Live plans to bring more similar fun activations for users nationwide to participate in.

Tune in to Bigo Live every evening at 6pm and 7pm to catch the semi-finals (Nasi Lemak Challenge) happening on the app now.

Tune in to the app on 31 August, 7pm onwards, to watch the grand finals of the Bigo x Merdeka Eating Competition, by downloading the Bigo Live app (available on iOS and Android).