Home Off The Wire SupermodelMe returns with Star-studded Cast SupermodelMe is rebooted and will spotlight aspiring models from across Asia, ready to battle for the ultimate SupermodelMe title

SINGAPORE, July 8, 2021 /PRNewswire/ — Refinery Media, an award-winning production company renowned for producing compelling content for international networks, is bringing back its popular reality competition series, SupermodelMe. The latest season promises a fresh approach, new challenges, a star-studded cast, and builds off the success of its first five seasons. The original multi-platform show has received several international nominations and has been broadcasted in 13 countries globally. 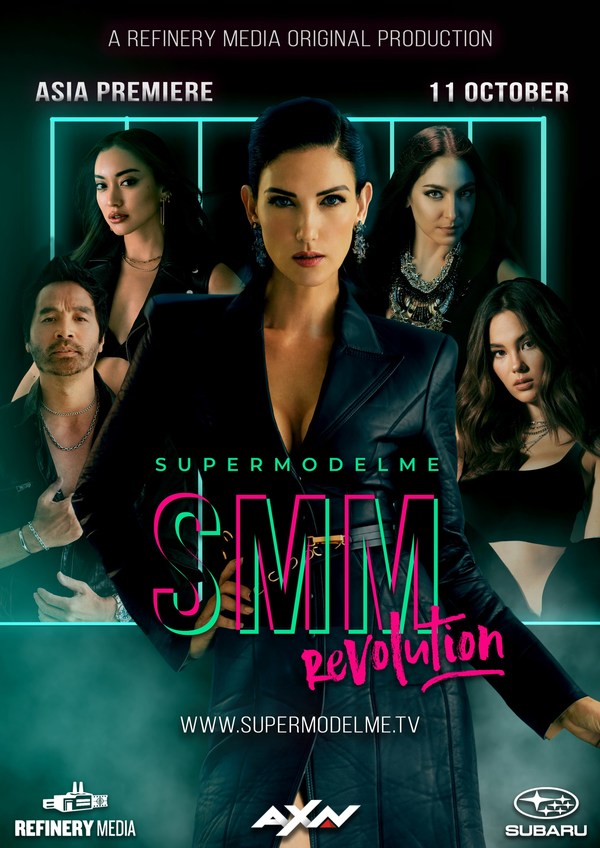 Produced by Refinery Media, with Presenting Sponsor Subaru Asia and supported by Singapore Airlines Kris Shop, Season 6 was filmed in Singapore in June, with 12 aspiring models from 8 markets across Asia, i.e. Singapore, Mainland China, Hong Kong, Indonesia, Malaysia, Philippines, Thailand and Vietnam. Themed around female empowerment, this season’s titled ‘SupermodelMe Revolution’, aims to provide a fresh take on the modelling reality competition series: one that is modern, edgy and exemplifies what it means to be a model and a female role model today.

Refinery Media’s modelling reality shows, including SupermodelMe Season 1 to 5 and Asia’s Next Top Model Cycles 5 & 6, have helped to create a new generation of successful Models and Social Media Influencers. In the all-new season, the supermodel hopefuls will face challenges like never before, as they undergo intensive sports and fashion-related tasks, while testing their individual mental and physical resolve in the cutthroat world of fashion. They do this while living together under one roof and going head-to-head against each other. The Revolution series aims to push the models’ boundaries of mind, body and soul through the series. Only one contestant will emerge as the ultimate SupermodelMe winner and will go home with a Subaru Ambassadorship, a cover on Harper’s Bazaar and a modelling contract with Storm Model Management.

Besides new and emerging talents, SupermodelMe Revolution will also feature familiar and prominent faces in the fashion and modeling industry. Hosted by supermodel and actress Cindy Bishop, she is joined by an esteemed panel of resident judges’ including American photographer Yu Tsai – most famously known for his involvement on America’s Next Top Model Cycle 22 and Cycle 23, Hanli Hoefer – TV host and emcee, Ase Wang – Singaporean actress, model and entrepreneur, and Catriona Gray – Filipino-Australian model, singer and Miss Universe 2018. This season will also feature task masters Monika Sta. Maria – Filipino model and runner-up of Asia’s Next Top Model (Cycle 3) and Dana Slosar – Thai model and winner of Asia’s Next Top Model (Cycle 6), who will help to mentor contestants and offer them the best advice possible.

“It’s been a long time coming, but we’re very excited to bring back SupermodelMe for its Reboot season. It’s a show that I am personally passionate about and this season, we go beyond the perfect picture, catwalk show or video, to challenge the girls to give their best. We had to deal with extra challenges due to Covid19, flying an international cast into Singapore and ensuring the entire crew and cast were safe, but all these were worth the effort for the opportunity to produce an entire original series once again. Fans can expect much more exciting and challenging moments,” said Karen Seah, Founder and Executive Producer of Refinery Media. “We’ve definitely pushed the boundaries of a locally-made, internationally-recognized multi-platform television format into one that is transformative and impactful, both on the fashion industry and the lives of the contestants. This season is no different – and we hope to raise the spotlight of local and regional talents, as well as female empowerment in the world of fashion and modelling.”

“AXN Asia is proud to be the Official Broadcast Partner of SupermodelMe Revolution,” said Avani Bhanchawat, Vice President and Head of Revenue at KC Global Media (KCGM) Asia, the network that operates AXN across 17 territories in the region. “As the leading English-language general entertainment channel in Asia, we are committed to offering quality, relevant content that resonates with the market. SupermodelMe Revolution makes an excellent addition to AXN’s robust lineup of local Original Productions, putting the spotlight back on promising and upcoming Asian talents. We look forward to making the show available to our strong and continuously growing fanbase across linear and digital platforms.”

“This is a platform and opportunity for young women around Asia who are not afraid to try, to push their personal and professional boundaries and break convention to achieve excellence. For Subaru, this show embodies what we believe in, as we push the performance and technological limits of our cars and our network, to bring the best out, in all that we do, for our customers. Resilience, drive and a can-do attitude are what we believe in,” said Glenn Tan, Deputy Chairman and Managing Director, Tan Chong International Limited. ”Through this experience, I hope the contestants get an opportunity to knock down outdated ideas, inspire others to try new things, and shine in their own unique ways.”

Originally produced and broadcasted online in 2009, SupermodelMe has transformed since its first foray into multi-platform programming, which featured weekly television episodes alongside online webisodes where viewers could also view behind-the-scenes footage and deleted scenes. SupermodelMe’s cross-platform and unique digital integration efforts received prestigious nominations including “Best Cross-Platform Content” at the Asian Television Awards 2012, “Best Non-Fiction” at the International Digital Emmy Awards in 2013, and “Best Editing” at the Apollo Awards in 2014. Since then, SupermodelMe has been broadcasted in 13 countries globally, with a television reach of more than 30 million people.

The Asian premiere of SupermodelMe Revolution is set to air on 11 October 2021, Monday at 7:55pm (SGT) on AXN Asia and 13 October 2021, Wednesday at 10:00pm (SGT) on AXN Taiwan, across 10 weekly episodes. More details about the contestants and programming will be released at a later date, follow @supermodelme on Instagram, Facebook or www.supermodelme.tv for the latest updates.

Refinery Media has grown to become one of the most successful and established unscripted production houses in Asia, producing large global formats for international networks and clients. These include the highest rated seasons of Asia’s Next Top Model Cycles 5 & 6, SupermodelMe Seasons 1-5, Cesar’s Recruit Asia Season 3, Asian Dream, Street to Kitchen, Amazing Race Season 5, Cooking for Love, Academy Fantasia and The Apprentice: ONE Championship Edition.

Headquartered in Singapore, with offices in Hong Kong and Ho Chi Minh City, Refinery Media is home to media veterans with diverse experiences and capabilities, providing end-to-end content solutions by applying a cross-disciplinary approach in its projects and productions.

Refinery Media has won numerous awards and industry accolades, including Best General Entertainment and Best Adaptation of An Existing Format for Asia’s Next Top Model at the Asian Academy Creative Awards. It has also earned several nominations including Best Digital Non-Fiction Program at the International Digital Emmy Awards for SupermodelMe.