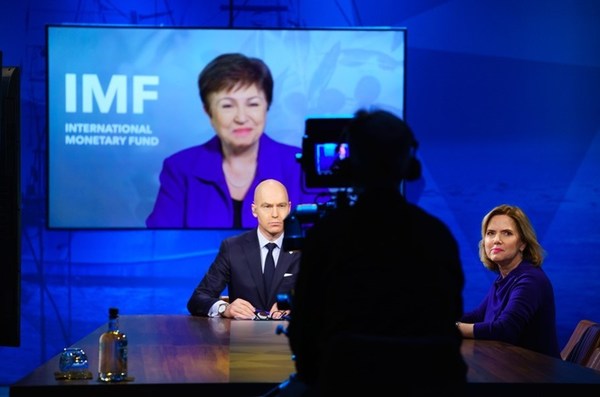 Kristalina Georgieva, Managing Director of the IMF speaks to Patrick Verkooijen, CEO of Global Center on Adaptation and Cora van Niewenhuizen, Dutch Minister for Infrastructure and Water during the Climate Adaptation Summit 2021

The Summit took place as the pandemic continues to erode recent progress in building climate resilience, leaving countries and communities more vulnerable to future shocks. A report by GCA “State and Trends in Adaptation 2020” showed that global funding would need to increase ten-fold, to US$300 billion a year, to meet the UN Environment Programme’s estimates of what is needed to respond to escalating climate risks. An accompanying technical report “Adaptation Finance in the Context of Covid-19” estimated that funding for climate adaptation fell by up to 10% in 2020, reversing the decade long trend of increasing adaptation finance to developing countries.

Ministerial Dialogue
At the start of CAS2021, GCA hosted its first annual Ministerial Dialogue, with over 50 ministers and leaders from international organizations, to scale-up global leadership cooperation to accelerate climate adaptation. Going forward it will also serve as an annual high-level forum on climate change adaptation, acting as a lever for global leadership to drive a decade of transformation for a climate resilient world by 2030.

Hosting the meeting, Ban Ki-moon, Co-Chair of Global Center on Adaptation said:
“In this GCA ministerial dialogue, we hope to achieve three things: a step change in ambition, so that adaptation receives the funding and attention it deserves. We need a step change in financing to mobilize hundreds of billions of dollars for this decade of transformation. And we need to strengthen partnerships and knowledge exchanges to make the best solutions and approaches available to all.”

Kristalina Georgieva, Managing Director of the International Monetary Fund and Board Member of Global Center on Adaptation said:
“The IMF is ramping up support for the policies, investment plans and skills countries need to strengthen their response to climate change. Reducing emissions and building resilience is win-win-win – good for growth and jobs, for health and for our planet.”

John Kerry, US Climate Presidential Envoy, who gave the keynote speech, noted that:
“All countries are now learning how to cope with climate change. But nobody has all the answers. The faster we gather information from each other, share data, the faster we can join together in the effort to do what we all know is necessary. The more quickly we’re going to be able to put good solutions to work, the faster we’re going to be able to make savings in hard pressed budgets around the world.”

Patrick Verkooijen, CEO of Global Center on Adaptation said:
“Covid-19 ushered in an era of multiple, intersecting systemic shocks, which demand equally powerful and coordinated solutions. Adaptation should be at the heart our recovery. Combining steadily rising carbon prices with a green infrastructure push can boost global GDP over the next 15 years by about 0.7 percent and generate work for millions of people. It will make us better prepared for future shocks.”

African Adaptation Acceleration Program (AAAP)
The urgency of the compounded COVID-19 and climate crises require accelerated momentum in Africa’s climate adaptation efforts. The African Development Bank and the Global Center on Adaptation (GCA) announced they are joining forces to use their complementary expertise, resources, and networks to launch a bold new Africa Adaptation Acceleration Program (AAAP). This flagship program will focus on agriculture, infrastructure, youth, and innovative finance. The African Development Bank has committed to mobilize $25 billion as climate finance between 2020 and 2025, of which at least 50% ($12.5 billion) will support climate adaptation and resilience building. The Bank and GCA will use this to leverage an additional $12.5 billion with other key partners to support African governments, private sector, and civil society to scale up effective adaptation solutions.

An example of GCA and the Bank’s transformative approach to accelerating adaptation is a project already underway in Ghana to develop its first national-level assessment of the resilience of its infrastructure systems to climate change. By exploring and showcasing the potential co-benefits of Nature-based Solutions as part of country-level package of investment in grey and green infrastructure, Ghana will function as a demonstration country of how to reduce costs and enhance ecosystems.

Commenting on the program launch, Akinwumi Adesina, President of the African Development Bank said:
“We must work together to accelerate adaptation action in Africa , a continent on the frontline of climate change emergency. Today’s announcement with GCA marks the start of a bold global effort to ensure that developing countries have the climate financing they need to implement and scale up climate adaptation solutions.”

Feike Sijbesma, Co-Chair of the Global Center on Adaptation said:
“We are all witnessing how climate change is visibly affecting people, societies and business. We must take a strategic and integrated approach to adaptation and develop the bold innovations and solutions to this global challenge. This all in combination to our continued effort to mitigate climate changes by reducing our emissions.”

Youth Leadership
Following the call to action from one million young people from more than 115 countries to “Adapt for our Future”, Akinwumi Adesina, President of the African Development Bank and Patrick Verkooijen, CEO of GCA announced the African Adaptation Acceleration Program would strengthen ecosystems that support youth-led climate adaptation entrepreneurship and youth participation in adaptation policies; scale up climate adaptation innovations by strengthening business development services to 10,000 youth-owned enterprises and 10,000 youth with business ideas on jobs and adaptation; Develop tailored skills and provide starting tool packs for 1 million youth to prepare them for climate resilient jobs and entrepreneurial opportunities in adaptation and unlock USD 3 billion in credit for adaptation action by innovative youth-owned enterprises through innovative financial instruments.

State and Trends Knowledge Exchange
GCA launched the State and Trends in Adaptation Knowledge Exchange (STAKE) to make data, information, and learnings on climate-change adaptation both accessible and actionable, with the aim of engaging policy-makers, professionals, experts, and other stakeholders. The new platform connects areas of science, policy, and practice through dedicated elements—such as the Adaptation Gateway, which covers data, solutions and insights, Communities of Practice, the State and Trends report series, and the Adaptation Action Agenda—brokering solutions to accelerate adaptation action from a local to a global scale. The Adaptation Gateway provides data visualization, systematized solutions, analyses, and insights on the state and trends of climate-change resilience and adaptation.

1000 Cities Adapt Now Initiative
During the Summit, the Mayor of Rotterdam Ahmed Aboutaleb presented the 10-year Global Program 1000 Cities Adapt Now. 1000 Cities Adapt Now’ (1000CAN) is a global program that aims for a green and just post-COVID-19 recovery — a recovery that helps create new jobs, improve equity and prepare communities to adapt to climate and health threats. The coalition network partners, including GCA which will host the program, sought the commitment of other mayors to strengthen the role of cities in improving our environment, climate and society in the lead-up to COP26, and beyond. This resulted in the Joint Statement on Accelerating Climate Adaptation in Cities being presented to world leaders including Prime Minister Mark Rutte.

Mayor Aboutaleb speaking at the launch said:
“Every day, cities are dealing with the effects of climate change and the need to adapt to be resilient. It is our task as mayors of cities worldwide to address these issues and generate solutions. With the Joint Statement on Accelerating Climate Adaptation in Cities, we underline our ambitions and needs to speed up and scale up adaptation measures in 1000 cities in the coming decade.”

A Bottle of Happiness for the Eco-Conscious

Active Super partners with MultiConnexions to tap into Australian diversity

How dance entrepreneur Jaya Karan took on the pandemic