KUALA LUMPUR, Malaysia, Jan. 19, 2021 /PRNewswire/ — Farhanna Qismina, or more affectionately known by her screen name, Sweet Qismina; will be conducting a virtual livestream “meet-and-greet-the-fans” session on 21st and 25th January at 9.30pm on both dates for fans and Bigo Live users. During the livestream, Sweet Qismina will not only be answering burning questions from her fans but will also choose three lucky fans to join her via video stream. Follow her on Bigo Live ID: SweetQismina and join her livestream for this once-in-a-lifetime opportunity. 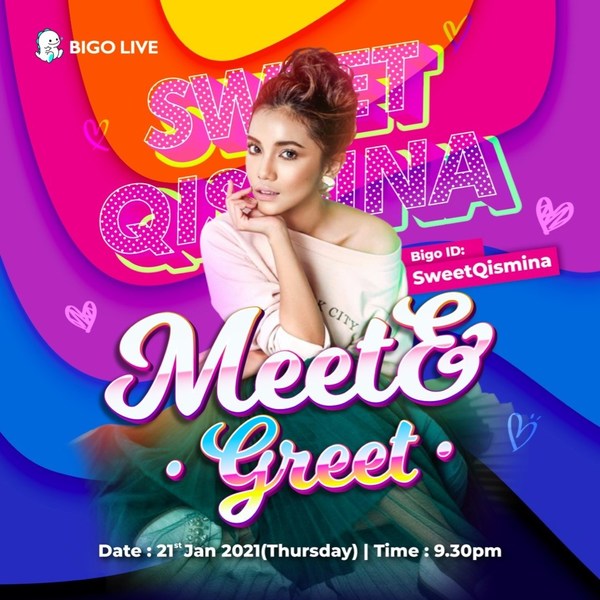 Live-streaming app, Bigo Live has become even more popular during the COVID-19 pandemic, as people took to different methods to keep social interactions alive. Bigo Live has emerged as one of the preferred methods especially among millennials as the app allows people to share their moments and interact in real time with others. Sweet Qismina joins the ranks of other global celebrities from various entertainment sectors like, Australian DJ M4Sonic, Japanese stars Ryo Nishikido and Jin Akanishi among many others, who similarly took to Bigo Live to “keep the magic” alive with their fans.

Best known for appearing in TV shows, like Fasha in Hikyat Putera Syazlan and as Julie in Waktu Rhat, the actress expressed excitement for the upcoming “meet-and-greet” session, as it allows her to interact intimately with her fans, unlike at a normal mass physical “meet-and-greet” session where she can only view her fans from afar. On Bigo Live, she is able to answer their questions, foster a bond with them while maintaining social distancing.

Fans can prepare for the up-coming livestream event by downloading Bigo Live here.

Bigo Live is one of the world’s fastest-growing live-streaming social communities where users broadcast in real-time to share life moments, showcase their talents and interact with people from around the world. Bigo Live has around 400 million users in over 150 countries and is currently the market leader in the live-streaming industry. Launched in March 2016, Bigo Live is owned by BIGO Technology which is based in Singapore.

Join Huawei’s #DoAnything Campaign for a chance to win PHP 50,000

Over 20 users won up to PKR 20,000 in SnackVideo’s #1coreLove campaign, celebrating love in all forms

Join Huawei’s #DoAnything Campaign for a chance to win PHP 50,000