Home Off The Wire iQIYI’s Hit Suspense Drama “The Bad Kids” to Premiere in Japan in... BEIJING, Oct. 11, 2020 /PRNewswire/ — iQIYI Inc. (NASDAQ: IQ) (“iQIYI” or the “Company”), an innovative market-leading online entertainment service in China, is pleased to announce that it has reached an agreement with WOWOW, Japan’s leading premium satellite television station, to release its hit suspense The Bad Kids, in Japan in early 2021. 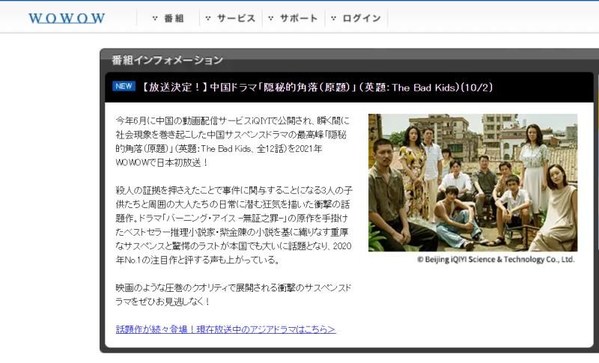 As part of iQIYI’s Mist Theater, a content library dedicated to iQIYI’s original suspense dramas, The Bad Kids is the first Chinese series that is directly acquired by WOWOW and the first Chinese modern drama shown on its channel.

A representative from WOWOW says: “It’s a great honor to cooperate with iQIYI. The Bad Kids has received rave reviews since its release in China, and we are looking forward to receiving the same response among the Japanese audience.”

Presented by iQIYI and co-produced by Eternity Pictures, The Bad Kids is a 12-episode suspense series that tells the story of three kids in a small coastal town who accidentally witness a murder. The hit suspense drama, produced by Han Sanping and directed by Xin Shuang, features a star-stud cast led by Qin Hao and Wang Jingchun. Since its release, The Bad Kids has received positive reviews from nearly 800,000 viewers on the influential media review platform Douban, with an average score of 9.2 out of 10, making it the then highest rated Chinese TV series released in 2020 and a breakout hit in China. Recently, The Bad Kids has received five nominations for the 2nd Asia Contents Awards organized by the prestigious 25th Busan International Film Festival.

The Bad Kids is one of the series under Mist Theater which has achieved success in overseas distribution. The other four series under Mist Theater have also secured overseas release. Kidnapping Game has already aired on Singtel TV in Singapore, which is also planning to air Sisyphus and The Long Night soon. The Mist Theater series are also broadcasted on iQIYI HD Channel on Astro, a leading media brand in Malaysia. Part of Mist Theater series will be also aired on mainstream TV stations in overseas markets such as Japan, South Korea, Hong Kong and Macau.

The successful overseas distribution of Mist Theater series and the release of The Bad Kids through WOWOW TV in Japan has proven that Chinese streaming media platforms, led by iQIYI, have the capability to consistently produce high-quality original content.  Meanwhile, their genre-based content development and innovative exploration of content distribution models have attracted great interest from overseas markets. iQIYI’s premium content has been well received among overseas audiences, gaining international recognition and bringing Chinese dramas to the global arena. The Singleton Scotch Whisky Launches ‘The Course of a Feast’: a World-first Dining Experience that Allows Guests to Create a Unique Artwork