Home Off The Wire JPEX partners with Cocoon (428.HK) to explore investments of US$10 million in...

HONG KONG, March 14, 2022 /PRNewswire/ — Cryptocurrencies have attracted widespread interest among investors as a vehicle for speculation. In Feb 2022, Fidelity International, with total AUM over US$4 trillion as at Dec 2021, has launched a physical bitcoin exchange traded product in response to a growing demand for digital assets among European investors. The product launch comes three months after Invesco brought its own bitcoin ETP to the market amid a growing willingness by large asset managers to enter the cryptocurrency arena. It further shows the strong interest in investing in cryptocurrencies among investors. 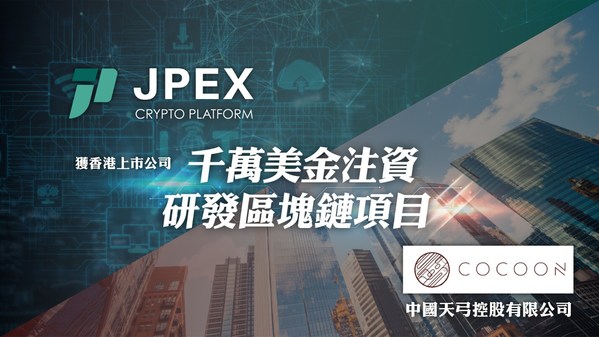 JPEX, a company incorporated in Australia specialising in decentralized application development, artificial intelligence program trading, arbitrage trading technology, cryptocurrency trading platforms and core blockchain research and development, is definitely one of the beneficiaries of the crypto boom. On 11 March 2022, Cocoon Holdings Limited (“Cocoon”) (428.HK) announced that it has entered into a non-legally binding MOU with JPEX that JPEX will seek to utilise its artificial intelligence program trading and arbitrage trading technologies for securities trading and other forms of transactions within 6 months with Cocoon to expand its business using blockchain technology. Once a detailed and legally binding agreement has been reached, JPEX will offer technical personnel and advice on the articial intelligence program trading and blockchain technologies to Cocoon. JPEX and Cocoon will aim to explore investments of up to US$10 million in various areas of blockchain technology, including non-homogenised tokens, trading marketplaces, decentralised autonomous organisations and others.

Cocoon says that blockchain technology and artificial intelligence is a major trend in the future and stepping in the relevant industries will help the Group to expand the diversity of its capital investment, and is expected to enhance the return on investment.

The partnership with the two listed companies further illustrates the strength and the leading position of JPEX among investors.

JPEX holds the state authorized virtual assets licenses from the US, Canada and Australia. JPEX’s users are allowed to trade and manage their cryptocurrency assets around the clock through its website, as well as its mobile app which can be downloaded through App Store and Google Play.