TOKYO, Feb. 24, 2022 /PRNewswire/ — A press conference to discuss how an infrastructure for seamlessly migrating the Metaverse application to the blockchain, occurred in Tokyo on February 8 where the prolific Jiro Ishii was invited to attend and give a speech on ‘How to make and spread IP.’ 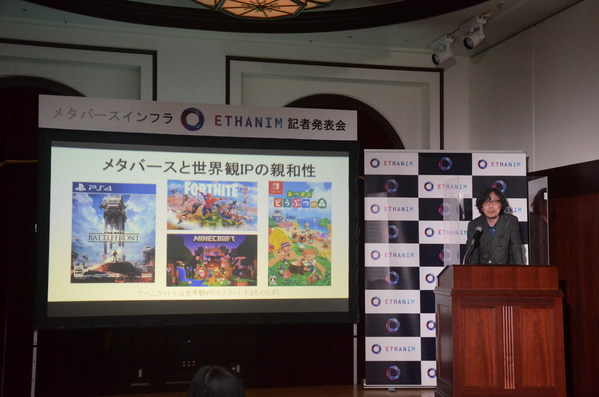 A few highlights from Jiro’s progressive career include him being a representative of Storytelling Co. Having worked extensively in game development, original artwork, scriptwriting, planning, original project, supervision, also has been a reviewer for the Japan Game Awards since 2010. As one of the most representative creators of adventure games in Japan, his experience spans over years in the video and advertising industries; long-established game developer, CHUNSOFT: this is where he was awarded the 9th CESA Game Award for his work on “Class 3B Jinpachi Sensei ~ Become a Legendary Teacher!“

He has also been invited by the Industrial Development Bureau of the Ministry of Economic Affairs who hosted the Digital Taipei 2015 Taipei International Digital Content Exchange’s ‘Master Forum”, to give a speech on ‘The influence of storytelling on the success or failure of games.’ Monster Marbles”, a popular mobile game with 40 million players worldwide, was premiered on YouTube with an original anime adaptation led by Jiro himself, and was simultaneously broadcast for free worldwide. He has pioneered with KADOKAWA to jointly plan the TV animation ‘dance weapons – dance messenger.’

Fundamental technologies such as blockchain, 5G / 6G, VR / AR, and edge computing are breaking through one after another, and people are getting closer and closer to the metaverse that they want. Ethanim aims to be the next generation of infrastructure by flexibly absorbing and integrating various cutting-edge technologies to provide comprehensive solutions for Metaverse applications.

Jiro reminded the broader public about how the Ethanim platform aims to realize free connections between applications. Making mention of its high affinity with ‘Multiverse IP’ as a future trend and how it will ensure; that content such as movies and music for instance may shift into the Metaverse transforming its overall user-experience as being more realistic.

The speed of innovation is so fast that no one can accurately predict the future. The scientific R & D approach is to maintain sufficient foresight, and realizing development based on the current situation will lead to future development plans. Based on this philosophy, Ethanim will work with the community to develop the Ethanim ecosystem.

For example, suppose people were given some equipment in the game, and in the original game design, that equipment could only defend. At this time, people can change the rules of the game just like the blockchain forks, if they wish. In the new version, this equipment will allow users to fly as well as defend, giving them the freedom to choose which version to enter.

Not only that, it also allows users to move assets between different applications. The specific method can be decided independently by the application. For example, people can use an avatar in one game as an avatar in another SNS application, or sell it on EC.