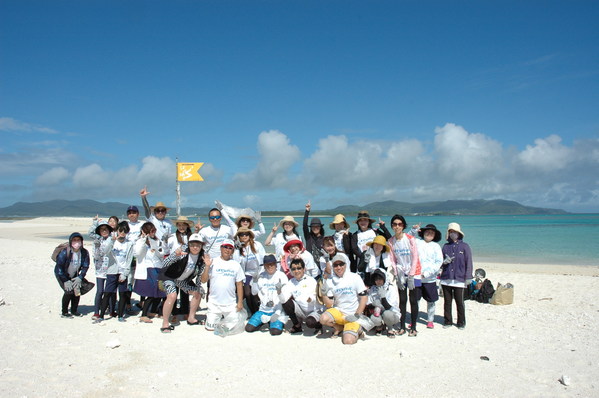 In order to solve the problem of marine debris that is connected to the world, it is implemented as a “first step” that anyone can easily participate in, and about 100 countries and regions participate every year.

Many companies and volunteer groups have been working in Japan to protect our planet. LifeWave members are one of them. The leader was the founder, and LifeWave members who gathered volunteers and the country manager of LifeWave Japan also participated. We carried out garbage picking activities on July 7th at Hate-no-hama on Kumejima (Okinawa), and on September 19 at Senagajima (Okinawa).

“Churaumi” Okinawa is famous for its beautiful beaches, but when the time comes, a lot of garbage seems to flow to the island as drifting objects. And unfortunately some beach users go home without cleaning up the trash. I kept picking up various kinds of garbage such as PET bottles, drifting trees, empty bottles and vinyl fragments, and some garbage such as toothbrushes and disposable lighters, from one end of the island to the other. While sweating a lot in the strong sunlight.

While I was happy to see the beach becoming beautiful every time I picked it up, I also faced the fact that this trash makes it difficult for the creatures living in the sea to live.

The problem of marine debris can never be solved by just picking it up, and no matter how much garbage you pick up, new garbage will be generated and repeated, and it will be washed ashore on some island or beach. It was an activity where each participant felt that the marine debris problem would not be solved unless we reduced the amount of garbage ourselves.

LifeWave members are working with the desire to keep the ocean that connects the world beautiful forever and to protect the beautiful ocean for all children living in the future.

About LifeWave
LifeWave products tap the body’s natural energy reserves and innate resiliency. They’re recommended by a broad spectrum of health practitioners and sold in over 70 countries throughout the world. The company was founded in 2004 and has grown to over 200 employees with offices in the US, Ireland, Japan, Taiwan, Philippines, and Malaysia and over a dozen distribution centers worldwide.