Home Off The Wire Captive insurance to be a primary focus in Labuan IBFC’s 5-year strategic...

KUALA LUMPUR, Malaysia, Dec. 3, 2021 /PRNewswire/ — Labuan International Business and Financial Centre (Labuan IBFC) continues to expand with increasing demand for its varying captive structures from across the globe, charting a 28% increase in its premiums for captive business and 18 new captives approved as at the third quarter of 2021. 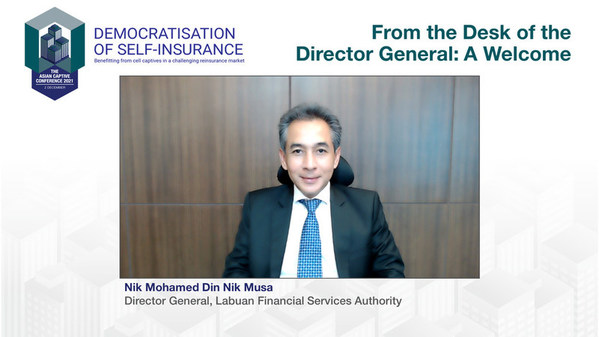 “Increasingly, we are seeing a rise in captive’s popularity globally driven not just by the pandemic but also insurance market challenges as well as natural catastrophes. Proving to be an effective tool in responding to risks and changing market conditions, captive formations have been on the steady rise,” said Labuan Financial Services Authority (Labuan FSA) Director General, Nik Mohamed Din Nik Musa, during his Welcome Address at the fourth Asian Captive Conference (ACC) today.

“At the same time, the Labuan captive business model which utilises protected cell companies (PCCs) has gained traction as a cost-effective method of operating captives. This could be attributed to a greater appreciation for self-insurance as a component of a dynamic risk management strategy as well as the recognition of its cost advantages in light of the hardening re(insurance) market.”

He added “Labuan FSA will continue to focus on strengthening Labuan IBFC’s position as a captive domicile hub by making the captive sector a primary focus in Labuan IBFC’s Strategic Roadmap for the next five years” and that “one of the goals is to strengthen Labuan IBFC’s complementary roles to Malaysia’s economy which will include the development of the Labuan insurance industry as a whole.”

Meanwhile, Labuan IBFC Inc. CEO, Farah Jaafar said, “The growth of 18 new captives as of the 3rd Quarter, is a marked increase from the 7 captives incorporated over the same period last year. Clearly the harder insurance market already prevailing pre-pandemic and made even harder by the pandemic, has allowed risk management professionals to truly bring the benefits of self-insurance to the fore.”

She added that with cell captives effectively lowering the barrier entry, smaller businesses are able to partake in self-insurance vehicles allowing for better cost efficiency vis-à-vis their insurance programme while adopting a holistic risk management strategy.

Farah went on to say that Labuan IBFC’s continued commitment towards developing a robust risk management and reinsurance “toolbox” will entrench the jurisdiction’s leadership in the global captive market.

Nik Mohamed Din said that Labuan FSA will continue to review the legislation in consultation with relevant stakeholders including industry players, to ensure that it is consistent with international standards and best practices as well as to allow for diversification and expansion of niche product and service offerings in Labuan IBFC.

In comparison to other captive markets, the current Labuan legislation is regarded as the most market-adaptive, particularly the provision on protected cell companies (PCC), both conventional and Islamic. Labuan IBFC is indeed well-positioned to advance into the next phase of development as one of Asia’s leading captive insurance hubs, leveraging a critical mass of insurance expertise, a robust yet flexible regulatory framework, and a broad range of risk management products.

He also added: “Labuan IBFC’s development over the years has resulted in a diverse pool of financial institutions, including numerous international insurers and reinsurers, establishing a presence in order to capitalise on Asia’s rising potential.”

As the fastest growing risk and reinsurance wholesale intermediation centre in Asia and MENA, Labuan IBFC is now home to 232 insurance and insurance-related entities including 64 captives, with Asia contributing nearly 92% of total captives and the remaining 8% being based in the US and Europe.

Captives are self-insurance vehicles which are strategic risk management tools utilised by many corporations around the world. To date, there are approximately 7,000 captive insurance companies set up globally that enjoy this benefit.

The 4th edition of The Asian Captive Conference themed “Democratisation of Self-Insurance” discussed the evolving role of risk management post COVID-19, the changing international tax landscape and the implications on captive solutions, as well as how cell captives can provide quick and cost-efficient access to reinsurance.

For more information on Labuan IBFC, log on to www.labuanibfc.com.

Labuan International Business and Financial Centre (Labuan IBFC), Malaysia, through our internationally recognised yet business-friendly legal framework, is the preferred international business and financial centre in Asia. Established in 1990, Labuan IBFC is regulated by the Labuan Financial Services Authority (Labuan FSA), statutory Regulator under the purview of the Ministry of Finance, Malaysia.

As a midshore jurisdiction, we offer global investors and businesses the benefits of being in a well-regulated and supervised jurisdiction, which adheres to international standards of compliance in tax transparency. We also provide fiscal neutrality and certainty in a currency neutral operating environment. Labuan IBFC, located in the centre of Asia, boasts a cost-efficient enabling environment making it an ideal location for substance creation for both global businesses looking at penetrating Asia or Asian entities aiming to go global.