AXP has a team of 35 people in its Kentucky operations with geological, drilling and operations capabilities that can operate a fully integrated, internally funded drilling function with only cementing and logging services to be outsourced. AXP has a major cost advantage by tapping its existing resources which will operate a leased drilling rig. Permits are pending on the first wells and drilling will commence in the coming weeks. Permitting is straightforward in the Illinois Basin.

AXP has formed this division as a platform to substantially increase current oil production and to add to the gains being realised from ongoing workover programs which will continue uninterrupted. It is anticipated that drilling new vertical wells will increase production much more rapidly as opposed to undertaking workovers alone.

The Company is planning an initial 4 + 4 well drilling program, the first phase of which is likely to run for around 3 months and then will model a more extensive drilling development program based on results of the initial wells.

All targets are infill drilling locations and offset wells to existing producing wells which means AXP is drilling on proven oil-producing leases. The locations have been identified and chosen after many months of assessment by the Company’s head geologist. AXP’s focus is to drill low-cost, high impact vertical wells. If the target warrants it, advanced stimulation will be undertaken (capped at ~USD$75k per well). This technique has not been deployed on any wells in the area and could yield improved flow rates. 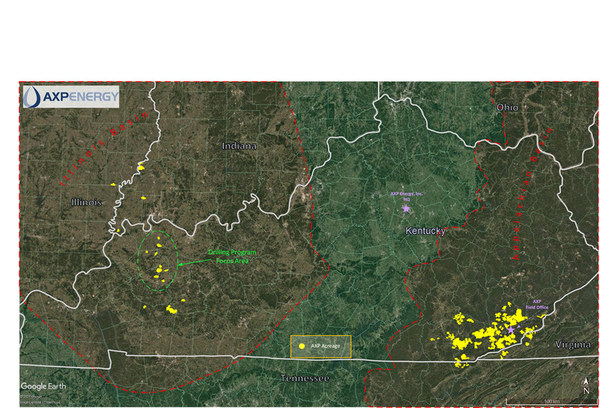 AXP’s Chief Executive Officer Tim Hart said: “As we have progressively integrated the MHP and Trey businesses, we have uncovered new opportunities to cost effectively and more rapidly increase oil & gas production; An internally-staffed drilling function is one such opportunity. The fact that we have been able to very quickly define new drill targets, assemble a team from existing resources and have first permits pending demonstrates that we can pursue production growth opportunities very quickly and cost effectively. The fact that we are drilling on producing oil and gas leases limits downside risk.

“With the WTI oil price now tracking above US$80 per barrel, we are intent on capitalising on the upside from our leases. As we have communicated previously, the Trey Exploration leases in particular have exceptional potential for oil production and they are a key focus for this first phase program.

“As well as these first targets, we are assessing opportunities to deepen some existing wells, side track others and bring into production some wells that were previously drilled and cased for future production. We look forward to regularly updating shareholders on progress and results.”

This announcement has been authorised by the Board of AXP Energy Limited.

AXP ENERGY Limited (ASX: AXP) (formerly Fremont Petroleum Corporation Limited) is an oil & gas production and development company with operations in Colorado, Illinois, Kentucky, Tennessee and Virginia. AXP’s focus is to aggressively grow daily production by improving current asset performance and opportunistically acquiring onshore USA oil & gas assets with the following characteristics: producing conventional oil & gas wells; production that can be enhanced through low-cost field operations and workovers; leases which are held by production and which do not require ongoing drilling commitments; and economies of scale which can be achieved by acquiring and carrying out similar enhancement strategies on contiguous or nearby fields with similar characteristics.

This announcement contains or may contain “forward looking statements” within the meaning of Section 27A of the Securities Act of1933 and Section 21B of the Securities Exchange Act of 1934. Any statements that express or involve discussions with respect to predictions, expectations, beliefs, plans, projections, objectives, goals, assumptions or future events or performance are not statements of historical fact and may be “forward looking statements.” Forward looking statements are based on expectations, estimates and projections at the time the statements are made that involve a number of risks and uncertainties which could cause actual results or events to differ materially from those presently anticipated. Forward looking statements in this action may be identified through the use of words such as “expects”, “will,” “anticipates,” “estimates,” “believes,” or statements indicating certain actions “may,” “could,” or “might” occur. Hydrocarbon production rates fluctuate over time due to reservoir pressures, depletion, down time for maintenance and other factors. The Company does not represent that quoted hydrocarbon production rates will continue indefinitely.