Home Off The Wire Artmarket.com: The young artists being snapped up in the art market’s three...

PARIS, June 10, 2021 /PRNewswire/ — New York, London and Hong Kong share the market for the younger generation of  Contemporary art stars and the most fashionable signatures seem to circulate on the secondary market in these three cities simultaneously. Artprice’s econometrics department further notes that the three main Western auction houses – Christie’s, Sotheby’s and Phillips – each participate in the success of these young stars. In short, we are seeing a double triangular network centered on the three most prestigious auction houses in the world in the three most attractive capitals of the international art market.

According to thierry Ehrmann, President and Founder of Artmarket.com and of its Artprice department “by presenting the works of the same artists in both the West and the East, the major Anglo-Saxon fine art auction operators are consolidating and accelerating the market for these young stars of painting and contemporary sculpture. Since 2013, Hong Kong has been competing with London and New York to raise the prices of this Ultra-Contemporary art.”

Having been revealed in the West, first in galleries, then in museums and sales rooms, it is now in Hong Kong that Nicolas Party, Avery Singer and Shara Hughes are recording their new auction records. Hong Kong, the gateway to Asia and Oceania, is pushing up prices and almost ignoring the estimates based on Western results.

On 25 May 2021, Shara Hughes’ painting I don’t deserve these flowers (2010) – estimated between $80,000 and $120,000 – sold for $612,000 at Christie’s Hong Kong. Faced with this result, the New York and London branches will have to find a way to stimulate demand… probably by including Shara Hughes in more ‘prestige’ sessions. Otherwise, they will have to accept that the best works by the young American painter transit through Hong Kong (as long as demand there remains strong).

Paris doesn’t seem to be part of this circuit

The French capital is hardly participating in the development of these young stars on the auction market. Is this because Paris is a more cautious market, less sensitive to fads? Or is it because Paris is less attractive than its rivals when it comes to bringing together a) new works in high demand, and b) collectors who would buy and sell these pieces? The answer is probably a mixture of both reasons.

Claire Tabouret, one of France’s most promising young painters, lives and works in Los Angeles. Not one of her works has been auctioned in France for over a year. Her two drawings offered by Piasa’s Parisian auction outlet in January 2021 failed to sell. And yet demand for Claire Tabouret’s work is currently exceptionally strong, as confirmed by her latest record of $870,000 at Christie’s New York in May 2021 for her Debutantes (Azure Blue) (2014).

The small but burgeoning NFT market

Having each sold a first NFT through auction this year, Beeple, Larva Labs and Mad Dog have all joined the art market’s Top 10 young stars. But with just one result in the auction sphere, these artists cannot be said to have a generally accepted ‘price level’. However, new works are on sale this week at Sotheby’s in a sale totled Natively Digital: A Curated NFT Sale, organized in New York.

NFT auctions remain primarily an American specialty. The European auctioneer Millon was the first to organize a dedicated NFT session in Europe on 20 May 2021 in Brussels. With much more reasonable prices – the results ranged from $800 to $23,000 – these sales are helping to strengthen a market still searching for stability. 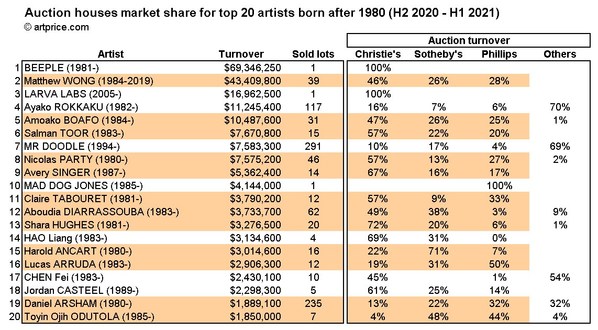 As the founding sponsor of the World Architecture Festival, 2021, GROHE empowers architects to create a healthier urban landscape