Home Off The Wire Shanghai Electric Celebrates Connection of Pakistan’s K-2 Nuclear Power Plant to the... 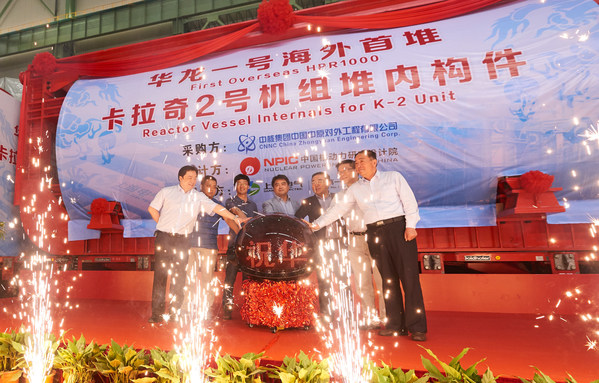 In May 2018, K-2’s reactor vessel internals were shipped from Shanghai Electric’s Shanghai No. 1 Machine Tool Works Co., Ltd. to its destination.

K-2 is slated to generate nearly 10 billion kilowatt-hours of electricity annually, meeting the annual electricity needs of one million people. It will help reduce standard coal consumption by 3.12 million tons per year, equivalent to planting more than 70 million trees. This project’s construction has propelled the development of related industries in Pakistan, creating more than 10,000 jobs in the country and playing a significant role in furthering people’s livelihoods and economic development.

K-2 was constructed under a contract signed between China National Nuclear Corporation and the Pakistan Atomic Energy Commission in 2013, and Shanghai Electric participated as the main equipment supplier to provide essential core components such as reactor internals and steam turbine generator sets.

Prior to K-2, the first international project to adopt the technology, the Hualong One was deployed for the first time at Unit 5 of the Fuqing Nuclear Power Plant in China, which entered commercial operation in January 2021. Over the course of nearly 20 years of R&D, the Hualong One completed 45 scientific and technological research projects, a landmark achievement of China’s innovative development of nuclear power.

In 2015, Shanghai Electric began to manufacture K-2’s reactor internals, which adopts the world’s highest design standards, covers 236 categories of equipment, and is composed of 13,487 parts. The height stands at 11.036 meters, with a maximum diameter of 4.188 meters and a weight of approximately 160 tons.

Over the course of the project’s commissioning and installation, the Shanghai Electric team had to confront the global pandemic and ensure the completion of K-2. To better serve the first overseas Hualong One, Shanghai Electric established its first overseas field service center for K-2 on January 9, 2019, duplicating its mature domestic field service model of a nuclear power project to ensure the unit’s realization. Thanks to these efforts, K-2 was successfully connected, bringing cost-effective and reliable electricity to Pakistan.