Globally competitive services provided by tutors from prestigious universities such as Harvard, Stanford, and Cambridge

Recognized corporate value of $89 million from Must Asset Management

SEOUL, South Korea, March 31, 2021 /PRNewswire/ — Ringle English Education Service Co., Ltd. (Ringle), a member company of Born2Global Centre, which provides 1:1 video English lessons with native-speaking tutors from prestigious U.S. and U.K. universities, has secured US$8.9 million in investments. The potential of Ringle, which is currently in the process of attracting investments in a Series A round, has been recognized and rewarded by Must Asset Management, which was the lead investor during Ringle’s latest round of seed funding. Thanks to this early investment of US$8.9 million, which recognizes the company’s corporate value of US$89 million, Ringle will be able to accelerate its progress through what remains of its Series A round of funding. 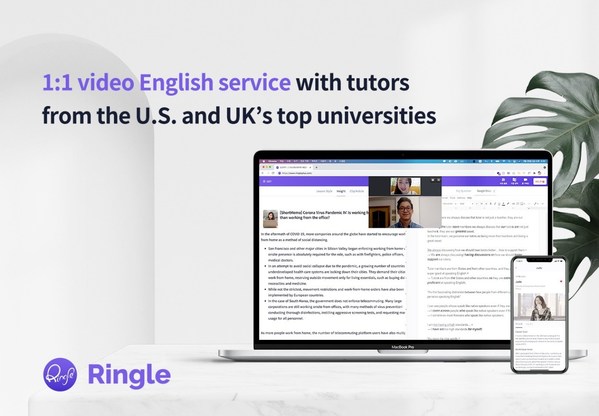 Ringle: 1:1 video English service with tutors from the U.S. and UK’s top universities

Ringle is a 1:1 video English tutoring service that provides students with real-time corrections in English on the latest current trends and business issues through lessons with Ivy League tutors. Within the field of English conversation services, Ringle has established a competitive edge through effectively leveraging its 600 tutors from prestigious U.S./UK universities, 300+ high-quality digital textbooks, educational webinars by specialist tutors with expertise in each field, on/offline career seminars on studying abroad & foreign employment, AI-based feedback report, and more.

Must Asset Management supported the decision to invest significantly in Ringle, thanks to the quality and rate of the company’s growth to date, which are products of its three core strengths. Firstly, the fact that Ringle has continued to grow more than 300% year-on-year since its establishment in 2015, solely through strong word-of-mouth advertising and student testimonials. What is more, Ringle was able to achieve this growth without relying on collaborations with influencers, handing out “gifts”, such as iPads, to students, and large-scale TV advertisements.  Secondly, Ringle is a prime candidate for near-future growth, given its rich customer pool of domestic adult English learners and non-English-speaking office workers & higher education students residing in internationally-influential nations, alongside the high number of junior students currently joining the platform. Above all, Must Asset Management believes that Ringle’s growth has just begun, given that its current success has been thanks to an elite team of just 25 people, working from its headquarters in South Korea and in the US, in Silicon Valley.

Ringle’s Co-CEOs, Seunghun Lee and Sungpah Lee, steadfastly believe that Ringle holds a competitive edge over other Edu-Tech startups that have recently become global education Unicorns in the U.S. and China. Within the Edu-Tech market, success is primarily measured by a company’s tutors, content and systems. Ringle has a proven track record in securing the industry best in all three areas. Firstly, it possesses the world’s best tutors, who have graduated from the U.S. and UK’s top universities. In addition, its teaching materials and content have been created by its most high performing tutors and Stanford, Harvard and Berkeley graduates, which is viewed as highly compelling by its global learners. Above all, Ringle’s 1:1 video learning & diagnosis system, developed in collaboration with KAIST’s (Korea Advanced Institute of Science & Technology) HCI (Human Computer Interaction) research team, enables students to immerse themselves in an online classroom environment that proactively enriches their learning experience. Moreover, Ringle’s data-based, objective feedback has been proven to promote more effective learning among students. The over 50% repurchase rate of Ringle’s 2021 users unambiguously evidences the powerful synergy created by Ringle’s tutor, materials, and system.

As of publication, Ringle currently has more than 10,000 paying customers and 600 tutors, and is providing its English education services globally, within South Korea, the U.S., Japan and Europe. Ringle is planning to strengthen its lead within the Edu-Tech market by intensively investing its Series A funding in highly proactive recruiting and service & content development within its U.S. subsidiary, in order to further its advancement of its tutors, content, technology & learning systems. Accordingly, Ringle intends to grow 5 times more year-on-year and surpass Unicorn status to become a Decacorn within 2 to 3 years. Ringle is expanding in all areas: from adults to juniors, from English to other subjects, and beyond Asia into the global market. It aspires to create world-class educational services by drawing upon the knowledge and insights of tutors from the U.S. and UK’s top 30 universities. Ultimately, Ringle seeks to create ‘a world where non-English speakers can clearly communicate and share their own opinions, without being inhibited by linguistic barriers.’

Ringle is expected to continue its Series A funding until the end of April. Given that discussions on additional follow-up investments from both new and existing investors are currently in progress, it anticipates being able to share further news of investments in the near future.

Pregnancy and COVID-19 vaccines and information for people who have been...