Home Off The Wire Second Star-studded Hank’s Home Game Sees Jokes, Jibes and Showdowns in the...

ONCHAN, Isle of Man, March 23, 2021 /PRNewswire/ — Actor Hank Azaria is back at the online poker table for a star-studded home game and plenty of laughs, powered by PokerStars.net. The second Hank’s Home Game will see Amy Schumer, Jack Black, JK Simmons and Jason Alexander take on Hank and each other, as well as Jon Hamm who returns to seek out more for his chosen charity after falling short in the debut game.

Hank’s Home Game – powered by PokerStars.net is a special online PokerStars.net Home Game featuring six celebrities interacting and competing on camera to win their share of a $50,000 donation to the charities closest to their hearts. For this series of home games, PokerStars.net has partnered with the Edward Charles Foundation to distribute funds raised through Hank’s Home Game to the celebrities’ charities of choice. Edward Charles Foundation is a fiscal sponsor, helping clients turn their philanthropic passions into an impactful mission.

The second game in the new Hank’s Home Game series can be viewed here. 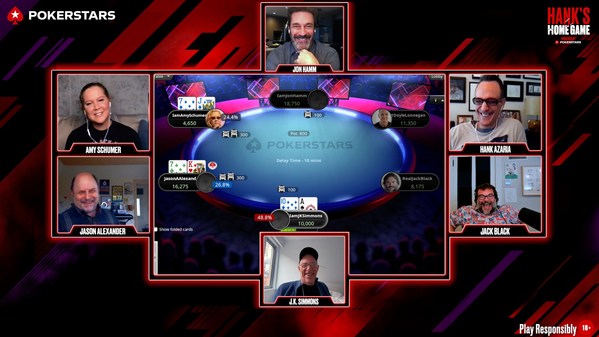 Host Hank Azaria said: “I’m excited to be back for another game and more entertainment for everyone to enjoy while we raise more funds for charity. Connecting with these guys for good has been a blast. You just never know what’s going to happen, and I don’t even mean just with the poker.”

Hank’s Home Game follows on from Stars Call for Action in May 2020 where more than $1 million was donated to charities as more than 90 celebrities came together to play poker. David Costabile took down the tournament and $100,000 was donated to his chosen charity World Central Kitchen to supply food to those who need it most.

PokerStars.net Home Games allow you to take your local home game onto the online felt, so you can play with friends and family from all over the world.

Play For Free at PokerStars.net. This is not a gambling site and does not provide an opportunity to win real money. Our games are intended for individuals aged 18 and above for amusement purposes only. Practice or success at social games does not imply future success at real money gambling.

Play For Free at PokerStars.net. This site does not provide an opportunity to win real money. 18+ only. Play responsibly.

Play Free at PokerStars.net This is not a gambling site and does not provide an opportunity to win real money. Our games are intended for individuals aged 18 and above for amusement purposes only. Practice or success at social games does not imply future success at real money gambling.