Home Off The Wire Amazfit T-Rex Pro Will be Launched in Malaysia: A Tough Military-grade Smartwatch...

SHENZHEN, China, March 23, 2021 /PRNewswire/ — Amazfit, a global brand in the wearables market, has launched the latest edition of its successful outdoor sports series of smartwatches, the Amazfit T-Rex Pro, at a live virtual event 10pm, March 23. 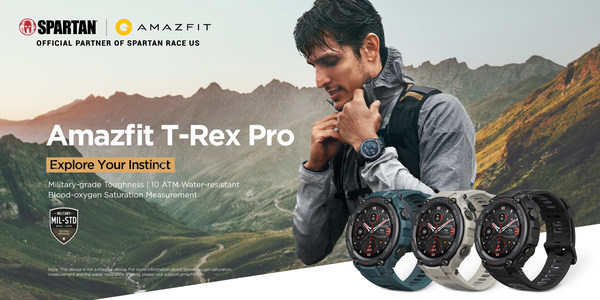 Amazfit T-Rex Pro Will be Launched in Malaysia

The Amazfit T-Rex Pro builds upon the popularity of the award-winning Amazfit T-Rex, first unveiled at CES 2020. Inspired by its predecessor’s success, and through consistent innovation, Amazfit T-Rex Pro is with 15 military-grade tests[2]. New functionality also includes 10 ATM water-resistance[3], a blood-oxygen saturation measurement system, the four global navigation satellite systems, a barometric altimeter, and more than 100 sports modes. Its comprehensive health and fitness tracking functions include a host of popular outdoor sports modes for adventurous activities, making it easier to break out of your comfort zone.