Home Off The Wire Sharing the same values of excellence and innovation as the America’s Cup,...

PARIS, March 17, 2021 /PRNewswire/ — Maison Mumm is proud to be partnering with the 36th America’s Cup presented by Prada, considered the pinnacle of yacht racing. Starting on March 10th, the race was contested on the inner Hauraki Gulf, off of Auckland, NZ, between the Defender Emirates Team New Zealand and the Challenger of Record Luna Rossa Prada Pirelli. 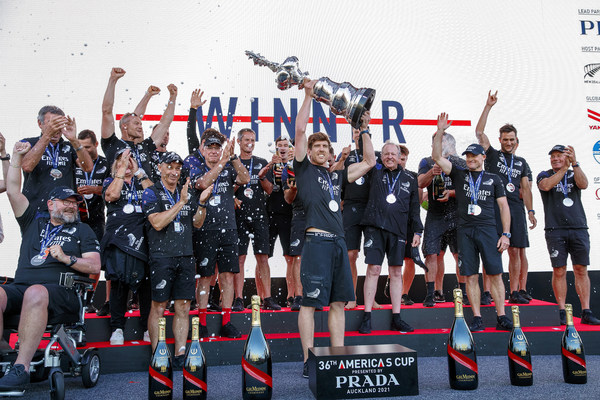 For the second time in its history, Maison Mumm has partnered up with this historic and legendary race, one of the most prestigious sporting events in the world. It was an obvious choice for the Maison since the America’s Cup shares the same values that it was founded on: a strong sense of heritage and the pursuit of excellence, challenges and innovation.

Held every four years, the America’s Cup is considered yachting’s most coveted prize. Teams compete for the oldest trophy in international sport and the titleholder sets the rules, including the choice of boat and racing format. Each yacht represents innovative design and technology and this cup will feature an AC75 design, a radical 75ft long monohull with no keel that flies on foils at speeds up to 50 knots.

Long affiliated with sailing, Maison Mumm is drawn to ventures, including technological innovations, and has found in the America’s Cup the same pioneering spirit that has defined it since its founding in 1827. The Maison cultivates its ability to innovate by continually improving the quality of its wines. This philosophy of excellence is best encapsulated by the motto of founder Georges Hermann Mumm: “Only the best”.

For the 36th America’s Cup, Maison Mumm has created a limited edition of its iconic Mumm Grand Cordon cuvée. This champagne is the epitome of the Maison’s signature style since it expresses all the nuances of the Pinot Noir grape variety from the Champagne region of France. The grapes are sourced from over 100 crus to create a bold, rich wine that subtly balances the power and structure of Pinot Noir with the elegance and minerality of Chardonnay and the fruitiness of Meunier. Whether toasting milestones or new beginning, the aromatic richness and intense freshness of Mumm Grand Cordon evokes life’s most unforgettable moments.

This emblematic cuvée, outmatched only by the racing intensity of the America’s Cup, can be enjoyed at the Mumm Yacht Club. Situated in the heart of the America’s Cup Race Village, the custom-built bar offers a premium way to watch the sailing and soak up the sun, all while enjoying a glass of Mumm champagne.

Mumm is part of Martell Mumm Perrier-Jouët, the prestigious cognac and champagne business of Pernod Ricard, the world’s n°2 in wines and spirits. With its distinguished heritage dating back to 1827, Mumm is the leading international champagne House in France and third worldwide*. Mumm Grand Cordon pays tribute to the iconic red sash – indented in the glass as part of a whole series of innovations. The revolutionary bottle is the perfect embodiment of the spirit of the House associated with audacious challenges and groundbreaking endeavours.