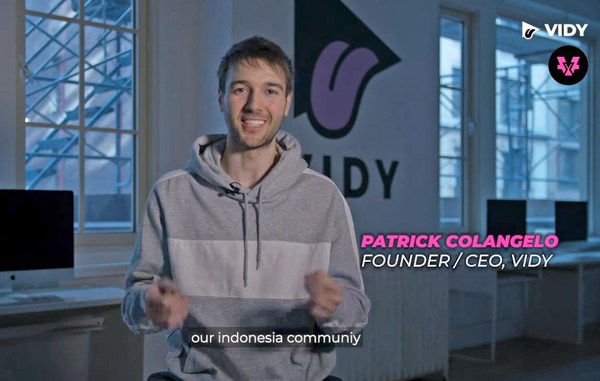 Vidy’s Founder and CEO, Patrick Colangelo said, “At Vidy, we put the power of your data and earning potential back on your hand. So, users can earn money while watching video and surfing the web, right at home.”

When users play a video ad, they will be rewarded with VidyCoin, which can be used for buying goods in the Vidy network, running ads or getting access to publishers’ premium features.

Cognizant that if these numbers were replicated across Vidy’s 100+ publishers, it might overcrowd the Ethereum network, the team converted VidyCoin into a dual-token ecosystem, namely VIDY and VIDYX.

Today, VIDY remains Ethereum-based, while VIDYX uses TRON so that users do not have to face a gradual increase in gas costs during transactions or wait a long time when withdrawing tokens.

VIDY is now used as a platform token, a staking mechanism for VIDYX withdrawals, bonuses, and campaign priority access. Meanwhile, VIDYX is a utility token, acting as attention-powered rewards which drive tradable data contracts on the TRON blockchain.

“VIDYX is really a fuel of power of Vidy’s engine, bringing good values by allowing users to earn money from our platform. This gives you the right to earn extra income, directly powered by real users and the attention online. By doing so, we are bringing the mechanism and more value to the ecosystem,” Patrick added.

This protocol is powered by miners who are paid with VidyCoin for each successful placement and decryption of user data which is then locked in a smart contract.

Moving forward, the VidyCoin economy could seed a larger audience to seamlessly mine asset crypto while reaping rewards either via watching videos or converting VidyCoin into cash at crypto exchanges.

Building on VidyCoin’s wider reach, Vidy is planning to roll out Reward City, a loyalty points platform to better serve advertisers, publishers and consumers, in the Vidy network.

In 2017, Vidy debuted the world’s first invisible embed layer that rests silently atop any website. Publishers embed tiny video into text, which users can access by holding down on linked text. Not only does this keep users from seeing unwanted or irrelevant ads, it is a net positive for publishers as the user never leaves the webpage.

With Vidy’s prioritized cross-shared data store, advertisers can audit all digital ad performance on their networks. This brings much-needed transparency to the digital ad space where ad fraud has resulted in losses valued at a whopping US$23 billion in 2019.

Founded by Harvard undergraduate Patrick Colangelo and former Credit Suisse investment banker Matthew Lim, Vidy is the world’s first single-page invisible embed layer for video that is completely decentralized. With just a hold, users reveal tiny hyper-relevant videos embedded in the text of any page on the web that supplement their reading experience effortlessly.

All video ads are placed with an NLP consensus protocol driven by miners. Each time a user unveils a video ad, he earns rewards in the form of VidyCoin that can then be used in the various forms.

Today, Vidy has over 30 employees globally and has integrated its technology to over 50 household names such as CNN, CNBC, and Esquire, while earning rave reviews from blue-chip advertisers like Coca-Cola.

For additional information about VidyCoin: