JAKARTA, Indonesia, Nov. 6, 2020 /PRNewswire/ — Bigo Live, a global leading livestreaming platform, continues to gain momentum in Indonesia as a pandemic-stricken world becomes the new reality. More Indonesians are turning to Bigo Live for entertainment, community and even to make an income.

Silva (Bigo ID: Silvapitaloka), a Bigo Live broadcaster, said, “I joined Bigo Live in December 2019 before COVID-19 hit. I love singing and just wanted to share my talent with others. But as I gained more fans on the app, I realised that I could actually earn a legitimate income doing what I like if I worked hard enough, and now I am earning a lot more than before.”

On Bigo Live, viewers utilize its direct gifting feature to send virtual gifts to their favourite broadcasters. These gifts are converted into Bigo beans which can be cashed out.

Silva is also part of the Panda Squad Family in Bigo Live. Families are smaller communities formed to provide resources and support for budding broadcasters. They train broadcasters on livestreaming and engagement skills, and members join PK battle activities together to propel themselves up leaderboard rankings. Most recently, Bigo Live hosted a Super Star event for its broadcasters. Three winners from Panda Squad, Anna, Pauline and Silva, became the face of Bigo Live on a billboard video. 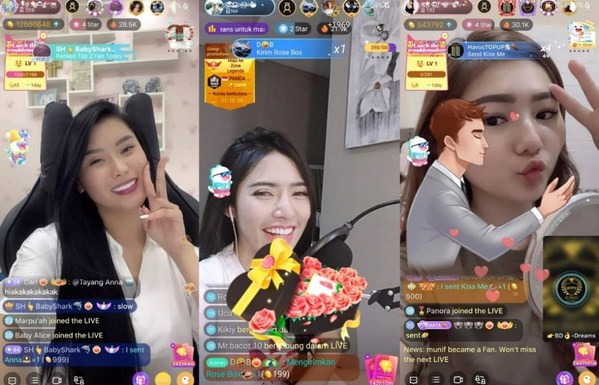 “I’m a very new broadcaster and I’m beyond ecstatic to have won this event! I don’t think I would have this opportunity if not for Bigo Live,” said Anna (Bigo ID: 319546666), one of the winners.

For Pauline (Bigo ID: paulinemarthines), the third winner, the community found on Bigo Live has been a great source of support for her, “I am very grateful to my Family for supporting me all this while. I’ve also made many genuine connections with other users, even those from outside my Family, and it’s such a joy going online and interacting with them, especially in this climate.”

Since the onset of the pandemic, Bigo Live has implemented several COVID-19 initiatives to educate and entertain users. This involved informative Q&A sessions with healthcare professionals who shared preventive tips with the community. Bigo Live also collaborated with renowned local Indonesian DJs like DJ Dinar Candy and DJ Omo Kucrut to host exciting virtual cloud clubbing sessions for users to party at home.

The livestreaming industry is expected to continue growing exponentially as the virus sparks second waves of COVID-19 restrictions around the world and more people turn to virtual experiences. In the second quarter of 2020, Bigo Live achieved a milestone of 29.4 million average monthly active users (MAUs), a 41.3 per cent year-on-year increase.

Bigo Live is one of the world’s fastest-growing live-streaming social communities where users broadcast in real-time to share life moments, showcase their talents and interact with people from around the world. Bigo Live has around 400 million users in over 150 countries and is currently the market leader in the live-streaming industry. Launched in March 2016, Bigo Live is owned by BIGO Technology which is based in Singapore.