Home Off The Wire More than 500 SANY machines are working on the Jakarta-Bandung high-speed railway...

BEIJING, Oct. 23, 2020 /PRNewswire/ — Recently, Jakarta-Bandung high-speed railway project has reached a critical milestone following the breakthrough of tunnel No.3. There are currently more than 500 SANY machines working on the construction site of the project in Indonesia. “80 percent of the equipment used in this project are provided by SANY,” LIU Haitao, head of a key subcontractor of this project introduces. 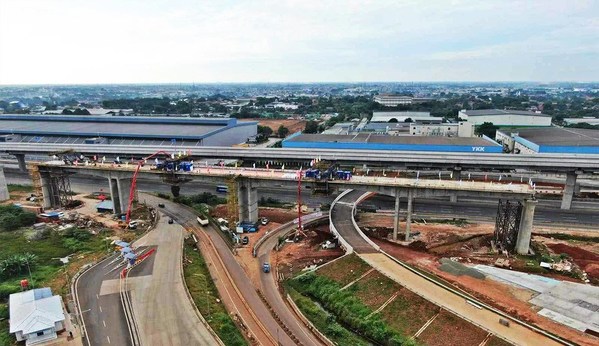 SANY provided a wide range of versatile machines that were able to handle mix of different kinds of soils. SANY SY215C excavators played a key role in the breakthrough of tunnel No.5, a challenging project that had to be completed with traditional excavation methods because of soft soil, and SANY STR318H roadheaders helped boring through hard rock in tunnel No.11.

Besides quality and reliable equipment, SANY also supported the project with tailored service. In addition to 5 specially designated vehicles and 3 service branches along the line, 15 service engineers stationed at the construction site, performing regular maintenance and answering service calls promptly. “We work and sometimes even live on the job site. Many people think we are workaholics but that’s how we get work done fast,” LIU Jun, SANY’s service engineer at the job site recalls.

This project also offered opportunities for the local community to improve labor force competency. “Local people are keen to be trained as operators in the project. Through this job, they can improve their skills to find a better job in the future,” LIANG Jing, director of the sales department of SANY Indonesia BU says. In the past 5 years, SANY supported the training of local operators with a variety of equipment, a program that benefited hundreds of local citizens.

“Jakarta-Bandung high-speed railway is a landmark infrastructure project demonstrating partnership and friendship between Indonesia and China. We believe it sets a very good example for Asian countries on cooperation,” Rini Mariani Soemarno, the then Indonesian Minister of State-owned Enterprises praised.

Jakarta-Bandung high-speed railway is set to connect Jakarta, the capital city of Indonesia, and Bandung, the textile hub, covering a distance of over 140 kilometers. The total investment of the project amounts to $6 billion. The Jakarta-Bandung railway with a designed speed of 350 km/h will be Indonesia’s first, even Southeast Asia’s first high-speed railway. When it is completed, the line will shorten passenger commute time to approximately 40 minutes.